The Boxing federation of India (BFI) introduced the official logo and anthem for the upcoming 2018 AIBA Women’s World Boxing Championship scheduled to be held from November 15 to 24th at National capital’s IG Stadium.

The event of launching logo and the anthem was attended by the several dignitaries from Sports Authority of India (SAI) including MC Mary KOM, veteran boxer Laishram Sarita Devi and others.

The Logo which was unveiled at the event depicted “fire and Women’s empowerment” and was precisely designed to exhibit the two key elements- the Inner strength of a woman and the national colors- coming together to mark the occasion that India is hosting the world championship for the second time in the country.

Likewise, the anthem which was also launched at the event carries the theme “Make some noise, scream and shout! We are here to knock you out!!!” encapsulates every emotion that a boxer goes through when she takes to the ring. The sheer energy of the anthem and its magnitude leaves a deep impact on everyone’s heart and mind alike.

Notably, Mary Kom who will be seeking her sixth title was named as the brand ambassador of the 10th edition of the Women’s World Championship. She will enter into the ring this time to clinch second gold at home since 2006.

“It is a matter of immense pride and prestige for BFI that in a span of two years since its inception, we have been able to bring the World Championship to India; we as a nation are strongly considered as one of the most promising boxing prospects in the world. Our boxers in the last two years have not only won medals at major tournaments but also have shown their prowess on all big stages. I hope we will be able to repeat the feats at home when we start our Worlds’ Campaign next month,” BFI President Ajay Singh said in a statement.

Since the inception of the Women’s World Championship in 2001, India had hosted the tournament once in 2006 and had registered the best ever haul of 8 medals, including 4 gold, 1 silver and 3 bronze.

Mary Kom asserted that she was looking forward to her participation at home.

“This World Championship is special in a lot many ways, I would definitely give my best shot and want to live the feeling of winning gold in front of the home crowd,” she said.

Hon’ble Minister of Youth Affairs and Sports Minister, Col. Rajyavardhan Singh Rathore wishing all the participants said, “It is with immense delight that I note the arrival of the Boxing World Championship to India. Our athletes, especially our women athletes, have defied all odds to excel in their sports, and women boxers of India are testament to this. They have inspired not only upcoming sportspersons, but women in general as well.”

“Such competitions, when held in India, will continually inspire and encourage our younger generations to include sports as a part of their lifestyle. Such events, thus, have potential to change the society completely, for the better. Ministry of Youth Affairs and Sports lends its wholehearted support to the championship, and wishes the organizers and participants all the best!” he added in his good luck message to boxers.

Beardo Kicks off with the 2nd Season of Beardo-Thon 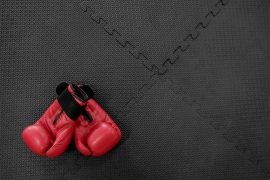