Anju Bobby George, a 2003 World Championships Bronze Medalist got awarded with ‘Woman of the Year’ by World Athletics for her outstanding contributions in training young talents with the mettle she has already proven.

Anju Bobby George has been pivotal shaper of the younger brains who are brimming with exceptional capabilities, she nurtures diligently yet motherly in her academy started years back. She has also encouraged players to take up the games at national and international levels along with raising the bloom of gender equality wherever necessary.

“Congratulations to Anju Bobby George on being crowned this year’s Woman of the Year at the World Athletics Awards,” World Athletics wrote on Twitter. “Her efforts in advancing the sport in India as well as inspiring more women to follow in her footsteps make her more than a worthy recipient of this year’s award.”

“The former international long jump star from India is still actively involved in the sport. In 2016, Anju opened a training academy for young girls, which has already helped to produce a world U20 medallist. A constant voice for gender equality, she also mentors schoolgirls for future leadership positions within the sport.” added World Athletics.

Anju Bobby George on Thursday tweeted saying she was ‘truly humbled and honoured to be awarded Woman of the Year by World Athletics.’ 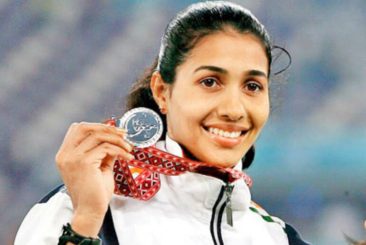 “There is no better feeling than to wake up everyday and give back to the sport, allowing it to enable and empower young girls! Thank you for recognising my efforts,” she tweeted.

All the people from sports fraternity has poured their congratulations on her achievement.

She is a hero of the World Championships where she excelled the game for the Indian side and fetched a Bronze for the country in her rally for the best. In 2016, she opened a training academy which has already produced U20 medallist recently.