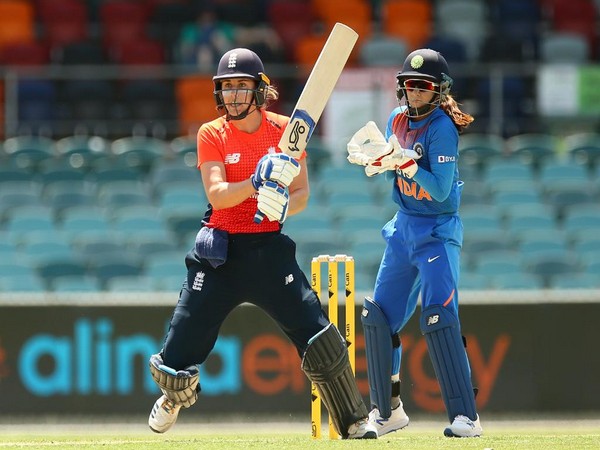 Chasing 124, India got off to the best start possible as Rajeshwari Gayakwad dismissed Amy Jones (1) in the very first over of the innings. Danni Wyatt (14) was also sent back to the pavilion in the fifth over by Radha Yadav, reducing England to 23/2.

The luck started going in India’s favour as the ball deflected from Deepti Sharma’s hands to the stumps at the non-striker’s end and as a result, Katherine Brunt (8) was dismissed, reducing England to 39/3 after six overs.

Heather Knight and Natalie Sciver then retrieved the innings for the Three Lions as the duo put on 37 runs for the fourth wicket, but as soon as England started to gain an upper hand, Gayakwad dismissed Knight (18) to bring India back into the match.

Sciver, continued to march on and brought up his fifth half-century in the format, but with just 10 runs away from the target, England lost Sciver (50) in the 18th over.

In the end, England registered a victory by four wickets with seven balls to spare.

Earlier, a spirited bowling performance helped England to restrict India to 123/6 in the allotted twenty overs.

Openers Smriti Mandhana and Shafali Verma put on 39 runs for the first wicket, giving the side a steady start at the top. However, England finally got the breakthrough in the sixth over as Sophie Ecclestone dismissed Verma (8).

After Verma’s dismissal, India’s run-rate slowed down considerably and England kept on chipping away at the wickets. Mandhana (45) and Jemimah Rodrigues (23) stood at the crease for a while, but both of them perished by the 13th over, reducing England to 80/3.

In the final overs, India kept on losing wickets and it boiled down to Deepti Sharma.

The left-handed batter ensured that the visitors go past the 120-run mark. Anya Shrubsole was the pick of England bowlers as she scalped three wickets.

Confident of winning a medal at Olympics, says Rani Rampal