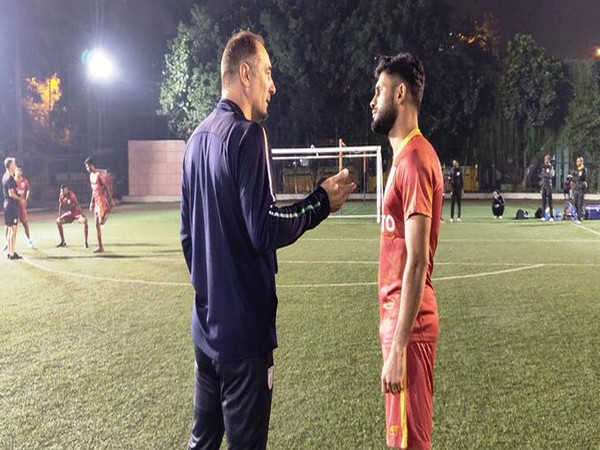 New Delhi [India], Nov 11 : Ahead of the FIFA World Cup Qatar 2022 Qualifiers against Afghanistan and Oman, Indian coach Igor Stimac is concerned about the players’ recovery.

“Players are coming right from matches and our primary concern is to recover as quickly as possible so that they can hit the ground fresh. Our medical teams are taking care of minor niggles. We are trying to utilise every second during the camp and the boys have also responded positively so far,” Stimac said in an official statement.

For the second day in succession on Sunday, the Blue Tigers hit the training ground to prepare for the upcoming matches.

After yesterday’s stretching and passing session, the players in the camp underwent a gym session in the morning and assembled at the HTC Sports Academy ground for a session which stressed on passion and positioning. Strength and conditioning coach Luka Radman also made the boys go through a session which fastens the muscle recovery process.

Meanwhile, Pritam Kotal, Dheeraj Singh Moirangthem, Anas Edathodika, Pronay Halder and Farukh Choudhary who joined the camp earlier today didn’t waste any time to get into the groove and sweated it out with the others.

“After the club commitments, it’s now time for national team duty. We are ready to hit full throttle. An away fixture is always going to be difficult but we have to be cautious and grab the opportunities to get the job done,” Anas said.

Pronay Halder, who is back with the team fold after King’s Cup, felt the Blue Tigers have enough ammunition at their disposal to achieve the “desired results”.

“Our team has been in good form and we had played some great football recently. If we can play to our true potential, we can get the desired results in our next two matches,” Halder said.

The Indian team will play against Afghanistan and Oman in the FIFA World Cup Qatar 2022 Qualifiers on November 14 and 19 respectively.