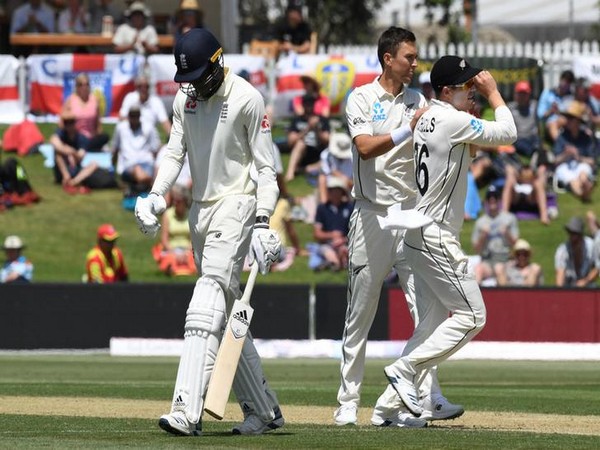 Mount Maunganui [New Zealand], Nov 22 : England restricted New Zealand to 144/4 after scoring 353 in the first innings of the first test at the Bay Oval here on Friday.

After bowling England out for 353, New Zealand openers came into bat and built a brief stand of 18-run. Tom Lathom (8) was found in front of the wickets by Sam Curran.

Skipper Kane Williamson joined Jeet Raval in the middle and both built a stand of 54 runs to get past the 50-run mark. Raval was sent to pavilion by Jack Leach in the 23rd over after he scored 19 runs.

Williamson played a knock of 51 runs before he was caught by Ben Stokes in the 40th over and the Kiwis were reduced to 127/4.

Henry Nicholls and BJ Watling are unbeaten at scores of 26 and six runs respectively and will resume their innings on day three. At the end of play New Zealand were at 144/4.

Earlier in the day, England resumed their play from 241/4 and were only able to add 112 runs to the total before bundling out on 353.

Riding on the confidence from day one, Stokes and Ollie Pope stitched a 36 run stand for the fifth wicket.

Stokes made 91 runs before Ross Taylor took an excellent one-handed grab at first slip dismissing the all-rounder in the first session.

Pope soon followed Stokes after his stint at the crease was ended by Tim Southee.

England kept losing wickets at regular intervals and were folded for 353 runs.