India, After running past New Zealand once again claimed the apex spot in the ICC test ranking.

The game at Wankhede Stadium, Mumbai ended flowery for the Indian cricket team. India beat NZ with a toll of 372 runs and clinched the series with 1-0 as the first game at Kanpur Came out to be levelling one. This was India’s biggest win on the run basis and now India has been the favourites in Test Championship.

Previously India lost to New Zealand in World Test Championship Finals in June and finished second in a game played at Gauba Oval. 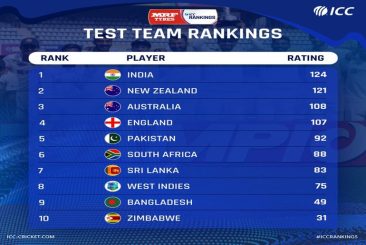 In the series some magnificent records were made and broken. Ajaz Patel nailed Fabulous 10 after Anil Kumble and Jim Laker for the New Zealand side. Ashwin once again took 50 wickets in a cricketing calendar. Shreyas Iyer became the only player to score a ton and half century in his test debut.

The India first innings would have looked very different had it not been for the efforts of the likes of Mayank Agarwal, Shubman Gill and Axar Patel. Mayank stood the tallest scoring a splendid and much needed (for himself and the team) 150 off 311 balls, with 17 fours and four sixes. Shubman Gill made 44 off 71 balls, while Axar Patel showed why he can be a very valuable all-rounder, scoring 52 off 128 balls, with five fours and one six. Between Cheteshwar Pujara, Virat Kohli, Shreyas Iyer, Wriddhiman Saha and R Ashwin, India scored a total of just 45 runs. Agarwal, Gill and Patel’s contributions were priceless.