Ajaz Patel, man born in Mumbai Suburbs, left while he was just 8 has returned India with astute head to rule. The man of the moment has created a history of taking all the 10 wickets of a cricketing side in a single inning of a test match.

Ajaz Patel, a spinner from the Kiwi brigade has unfurled his flag of grit, when he knocked all the players of Indian Team and finished his ‘Fabulous 10’ . He became only third bowler to achieve the feat after Indian Stalwart and spin wizard Anil Kumble and Jim Laker.

Anil Kumble achieved the feat bowling Pakistan out of the chart in 1999 test series. While Jim Laker did the same against Australia in 1956. Marking the years, Ajaz Patel is the only bowler to clinch ‘Fabulous 10’ in 21st century .

During an ongoing 2nd test of the 2match- test series at Wankhede, Mumbai, he alone bowled 47 overs while his other teammates loitered around 22 overs maximum. 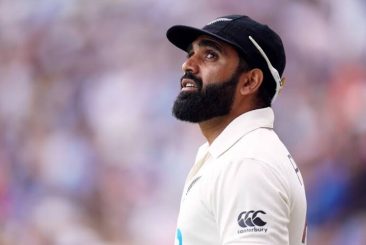 Ajaz Patel, is an Indian born chap from the Mumbai itself, he along with his family moved to Australian continent, where after sometime he showed his stern intent towards the game and career flourished after his selection for the international cricketing brigade.

After the feat, he even got a congratulation tweet from the Indian Magician Anil Kumble through social media.

CSA and BCCI Clears Cloud For Series amid Omicron