Ajaz Patel, New Zealand Spinner and stunner in the second game of India Vs NZ, has got special gift from the Indian team as a token of felicitation. Team India rewarded his feat with a signed T-shirt from the Indian dugout. Along with T-shirt, Mumbai Cricket Association also offered him With Awarding Momentos.

He Stunned the crowd with his outstanding figures of 14 hauls for 225 runs which is only the best bowling figures in test in India.

Ajaz Patel became the third bowler in Test history after Jim Lakers and Anil Kumble to pick 10 wickets in an innings and the first to bag a record 14-wicket haul in international red-ball match in India.

Patel had got a standing ovation from the Indian team and the fans when he achieved the feat in the first innings on Sunday. But unfortunately, the Mumbai-born Patel’s heroics still couldn’t save New Zealand from losing the game by 372 runs and going down 0-1 in the two-Test series.

Ajaz Patel got official scorecard of the game framed and furnished, from the Mumbai cricket association as they awarded the Mumbai born talent for the exceptional feat. 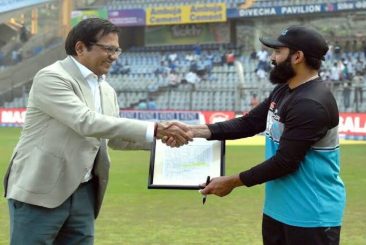 Ajaz Patel is a Mumbai born chap who migrated to Australian continent at mere age of 8 where he pursued his career and has returned as a jumbo of the game, furnishing astonishingly well.

India had also did the same gesture in Border-Gavaskar Trophy when our side offered a signed T-shirt to Nathon Lyon For his 100th test at Brisbane which visitors won.

“I am not going to reply I have got chills down my spine now,” told Ajaz Patel while taking Ashwin’s jersey. 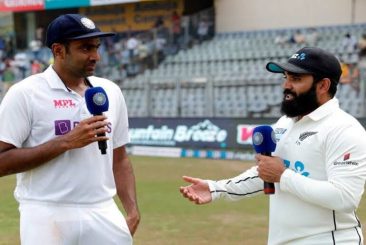 “As a mark of respect and something that I enjoyed from the dressing room. I thought I will get my jersey signed by my teammates,” said Ravichandran Ashwin while presenting him the jersey.