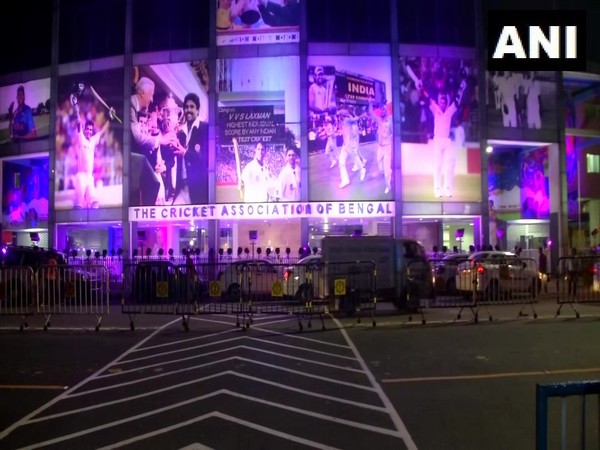 Kolkata (West Bengal) [India], Nov 22 : The Test between India and Bangladesh today will be a historic moment as both the sides will play their first-ever day-night Test with a pink ball here at the Eden Gardens.

This will also be the first under lights Test in India. When India and Bangladesh step on the field later in the day, they will join the list of day-night Test-playing nations.

A giant-sized pink ball hangs over the Eden Gardens letting people know that the iconic venue is going to become a part of Indian cricket’s history. The stands at the ground have been equipped with pink lights.

Out of ten major Test-playing nation now only Afghanistan and Ireland are left from playing pink-ball Test.

The first-ever day-night Test was played in 2015 between Australia and New Zealand at the Adelaide Oval. The match was won by Australia by three wickets.

The last day-night Test was played between Australia and Sri Lanka in the month of January this year.

Australia is the team that has played the most day-night Tests until now as they have participated in five matches and have recorded victories in each of them.

The team from Down Under will play two more day-night Tests this year– first against Pakistan from November 29-December 3 and the next against New Zealand from December 12-16.

Bangladesh Prime Minister Sheikh Hasina will attend the first day of the second Test at the Eden Gardens.

A special flight of Biman Bangladesh Airlines carrying the Bangladesh Prime Minister and her entourage will depart from Hazrat Shahjalal International Airport (HSIA) in Dhaka at 10 a.m. (local time) on Friday.

The plane will land at Netaji Subhas Chandra Bose International Airport in Kolkata at 10:25 a.m.

After the ceremonial programs at the airport, the prime minister will go to Hotel Taj Bengal Kolkata where she will be staying during this short visit.

Later, the premier along with the Chief Minister of West Bengal Mamata Banerjee will go to the Eden Gardens Stadium and ring the ceremonial bell at about 12:30 p.m.

After watching the first session of the match, Hasina will return to the hotel.

On the end of the first day’s match, the premier will attend a small cultural program followed by a felicitation program arranged by the Cricket Association of Bengal at the ground of Eden Gardens Stadium.

India won the first Test by an innings and 130 runs after clinching the T20I series by 2-1.