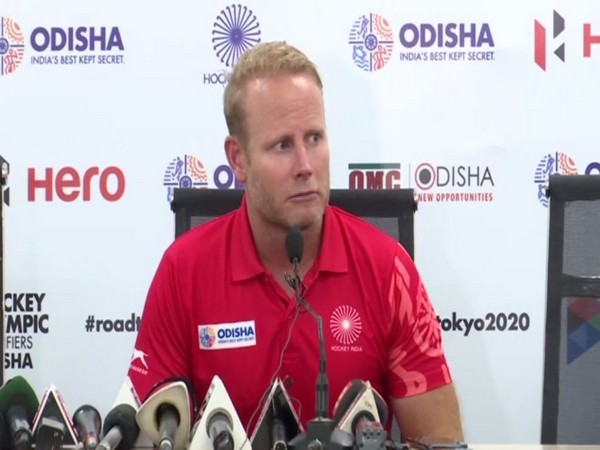 Bhubaneswar (Odisha) [India], Nov 2 : India women’s hockey team coach Sjoerd Marijne has said that one can only dream about registering such a thumping victory over their opponents.

His remarks came after India’s 5-1 victory over the USA in the ongoing FIH Olympic qualifiers. He also heaped praise on Sharmila Devi and Salima Tete, saying that they both created a good number of chances despite being very young.

“You dream about those things, but I think we were really effective and that means a lot. One of the best goals was from Navneet Kaur, and the speed of Sharmila Devi and Salima Tete was really good, they are just 18 and 17 years old. Setting up an attack at this age, I think every Indian can be really proud of that. Still, I keep saying, we don’t have anything yet. We have to recover very fast,” Marijne told reporters after the match.

“I am happy with the goals we scored, but the quality of our play must be better in our next matches. The girls are happy but they are not satisfied, I know we can play better than this. We struggled in the first thirty minutes, I think its nerves, but you cannot control nerves. It was the first time for the girls at this stadium, but now they have the experience,” he added.

However, coach Marijne also said that there is no room for complacency and the side would not qualify for the Tokyo 2020 Olympics after this win. He said that the lineup can only celebrate if they end up winning their next match.

“You know how fast things can go. The most important thing for us, and that is what we have told the girls too, is that you do not get to Tokyo through today. We can only celebrate after our next match. We have nothing so far,” Marijne said.

In the match between India and USA at the Kalinga stadium, Lilima Minz scored the opening goal for the hosts in the 29th minute of the game.

Sharmila Devi then added another goal to India’s tally in the 40th minute.

Consolidating India’s position further in the match, Navneet Kaur netted another goal, taking the scoreline to 4-0.

India completely dominated the USA and did not let the momentum lose as Gurjit Kaur, in the 51st minute, smashed another goal for the hosts.

The visitors finally managed to open their tally in the game as Erin Matson scored a goal in the 54th minute.

India will now compete against the USA for the second leg of the qualifiers on November 2.