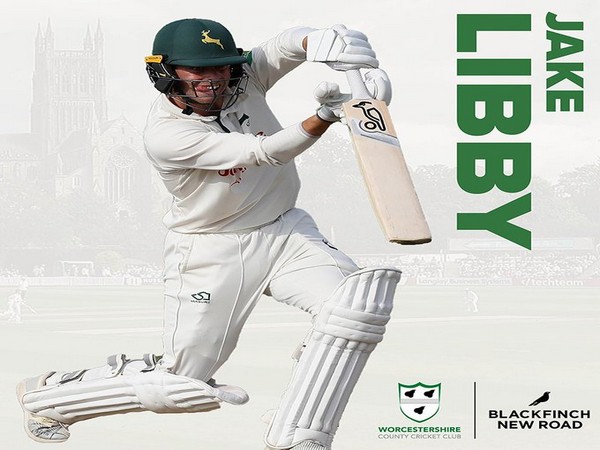 Worcester [UK], Nov 13 : England county cricket club Worcestershire on Wednesday signed a three-year contract with Jake Libby until the end of the 2022 season.

The 26-year-old Nottinghamshire batsman impressed his new county when he scored 100 not out in the day-night Championship match against Worcestershire at Trent Bridge in June 2018, following on from 88 in the first innings.

The Plymouth-born player struck a century on his Nottinghamshire first-class debut against Sussex at Trent Bridge in late 2014 against an attack containing Steve Magoffin and Chris Jordan.

He was the first Nottinghamshire player to achieve that feat for 68 years.

He has scored five first-class hundreds and amassed 2,574 runs from 55 games at an average of 28.60 including all 14 Championship fixtures in 2018.

Worcestershire Cricket Steering Group Chairman, Paul Pridgeon hopes Libby’s signing will act as a spur to some of the promising young players at the club.

“We are delighted to have acquired Jake’s services. He spoke to other counties but made it clear he was keen to come here. Jake will strengthen us in terms of Championship and white-ball cricket,” Pridgeon said in an official statement.

“At 26, hopefully, he has his best years ahead of him and he is hungry to make a big impression,” he added.

Interview of Wellness Coach Simran Khosla – Get Your Tips Here!