Tamil Nadu Government is all set to start building a sports city on outskirts in proximity of East Coast Road passing through. For that Government Officials have marked the land amassing 500 acres in a stretch, having state-of-the-art facilities including synthetic track, indoor cycling velodrome, hockey stadium, multipurpose indoor stadium for basketball, volleyball and boxing.

The project is coming up near Thiruvidanthai, about 30km south of Chennai on East Coast Road (ECR). The identified land parcel, spread across both banks of Buckingham canal and nestled between ECR and OMR, is part of 3,000 acres of government land where, in 2003, the then AIADMK government had planned to build an administrative city.

Tamil Nadu sports minister Siva V Meyyanathan told TOI that the detailed project report for the project would be prepared soon. “We have studied Pune’s Shree Shiv Chhatrapati Sports Complex and Patiala’s Netaji Subhas National Institute of Sports. What we plan for Tamil Nadu will not just be on par with these facilities, but better than them,” said Meyyanathan. 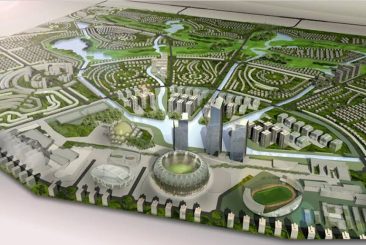 The idea behind the centre is to catch sportspersons syoung and train them to be international sports stars. “There is no point of finding sporting sensations who are 18 years old. It i difficult to train them further. We need to spot talent, especially in rural areas, when they as young as 11 years, and then train them. We shall give them the right diet and ensure they win medals for the country,” Meyyanathan said. Sports fraternity in the state double-cheered the announcement. “We thank the chief minister for the announcement and hope the project is completed sooner,” said C Latha, secretary, Tamil Nadu Athletics Association. “While the announcement is great, how soon they implement is more important. If our athletes are able to use it before the next Olympics, it would be most helpful,” she said.

Tamil Nadu has already improved in player contingent by sending 12 athletes in the Tokyo Olympics, which is double the number compared to previous Olympics. “We seem to be content with participation. Such a mega infrastructure is the first step towards achieving international success,” Latha said.

This all new sports city is bound to help groom the youth in the nearby areas and even states surrounding the Tamil Nadu. The 500 acres sprawling sports city is going to rake up the gaming culture in the area shaping future of the state.