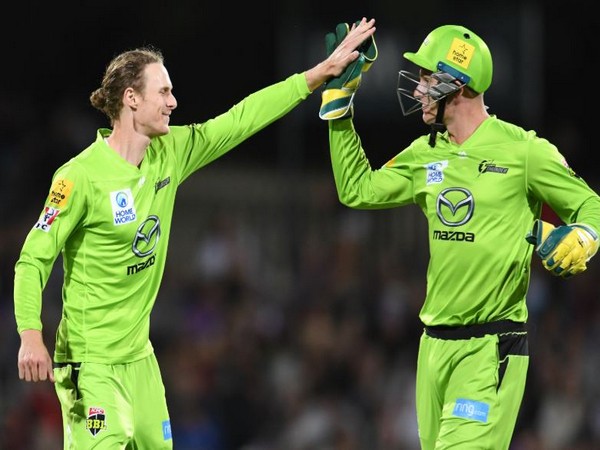 With this defeat, Hobart Hurricanes’ season came to an end while Sydney Thunders will now take on Adelaide Strikers on February 1.

Chasing a challenging target of 198 runs, Hobart Hurricanes failed to have a good start as their skipper Matthew Wade (14) was dismissed in the third over by Jonathan Cook.

The opener D’Arcy Short was then joined by Macalister Wright out on the field. Short started playing furiously as he smashed one six and two boundaries to Arjun Nair in the fifth over.

However, Cook ended Short’s 37-run innings in the seventh over. In the next over, Wright too gave away his wicket off Chris Tremain’s ball. Cook continued his scintillating form and picked another two wickets in the 16th over to put Hobart Hurricanes under immense pressure.

In the 19th over, Daniel Sams dismissed Nathan Ellis and Qais Ahmad on two consecutive balls to end Hobart Hurricanes innings on 140 runs.

Earlier, after opting to bat first, Sydney Thunders got off to a brilliant start as openers, Alex Hales and Usman Khawaja, struck regular boundaries.

Both played a fast-paced inning and took the team over the 100-run mark in the ninth over. Soon after scoring his half-century, Khawaja was given LBW off James Faulkner’s delivery.

Callum Ferguson then came out to bat but failed to form a partnership as Hales (60) was sent back to the pavilion by Scott Boland.

The fall of wickets did not stop but Alex Ross and Chris Morris’ 21 and 14 runs innings respectively helped Sydney Thunders put up a good total of 197 runs.

4 goals and clean sheet, a tough combination to manage: Zidane after win over Zaragoza