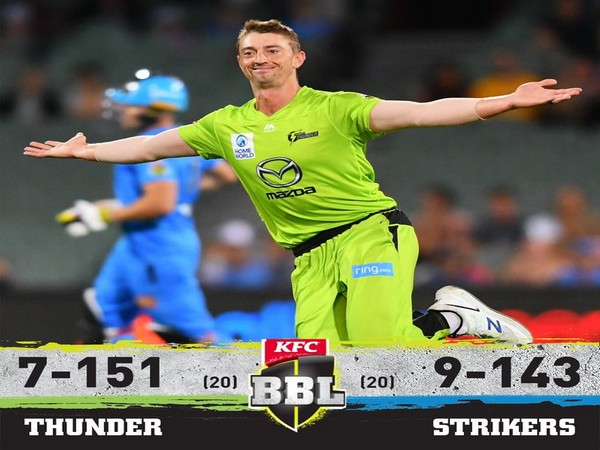 With this defeat, the campaign of Strikers came to an end, while Thunder will next take on Melbourne Stars.

Chasing 152, Strikers had a worst possible start as both openers were dismissed cheaply, reducing the side to 35-2. Jake Weatherald got out after making 18 runs while Phil Salt scored just five runs.

Travis Head and Alex Carey put on 3o runs for the third wicket and took the side past 50 runs mark. Jonathan Cook broke the partnership as he bowled Head in the 10th over.

After the unfortunate run out of Carey (28), Striker suffered a collapse in the mid of the innings. Rashid Khan, Matthew Short, and Michael Neser were all dismissed on duck, reducing the side to 117-6. Jonathan Wells and Michael Neser kept the run chase alive but in the end, Strikers fell short of eight runs.

After being put in to bat first, Sydney Thunder did not start well and lost Usman Khawaja (15) in fourth over. Callum Ferguson then joined Alex Hales at the crease but his stay was brief as Peter Siddle dismissed him.

Hales looked in great touch as he smashed half-century, giving the side much needed momentum. However, Rashid Khan dismissed dangerous-looking Hales (59) in the 12th over of the innings.

Alex Ross and Arjun Nair started well but failed to capitalize on their starts and got out after playing a knock of 12 and 18 runs respectively. In the final overs, Chris Morris and Daniel Sams took the side to a total of 151/7 in 20 overs.