Ronaldinho, The Brazilian Football legend once again showed why he is boss of the game. He scored majestic hatric in the game held at the Estadio Rei Pele in Brazil on Wednesday. He was reportedly playing along with Ronaldo’s son.

Ronaldinho retired from all formats in 2015, showed proved a leo is never off the track when it comes to hunt. He is a Ballen d’ Or winner of 2005 and had been a constructor of the wins throughout his career for his team.

In the match, he scored three goals and his last one was an outstanding chip that took the scoreline to 5-1. 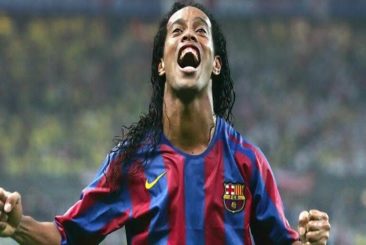 Ronaldinho Gauba is an outstanding outpacer of the game, who has been a cornerstone in victories for his team Brazil. One of the finest player from the Brazil had been face of the team’s win in 2002 in Japan and South Korea. The word ‘Impossible’ is an understatement for him.

He is now a 41 year old jumbo who has specially taken as Winger,  properly an outshining Midfielder. Ronaldinho won two FIFA World Player of the Year awards and a Ballon d’Or. A global icon of the sport, he was renowned for his technical skills, creativity, dribbling ability and accuracy from free-kicks, as well as his use of tricks, feints, no-look passes and overhead kicks.

Ronaldinho begun his career with Gremio in 1998 after that he signed Barcelona and his performance accrued him FIFA Footballer of the year in his very Second series. Later on, he played UEFA and La Liga Titles with his name flourishing in colours. In his international career with Brazil, Ronaldinho earned 97 caps and scored 33 goals and represented his country in two FIFA World Cups. The stalwart has still showed in the exhibition match the same grandeur he shows.

CSA and BCCI Clears Cloud For Series amid Omicron