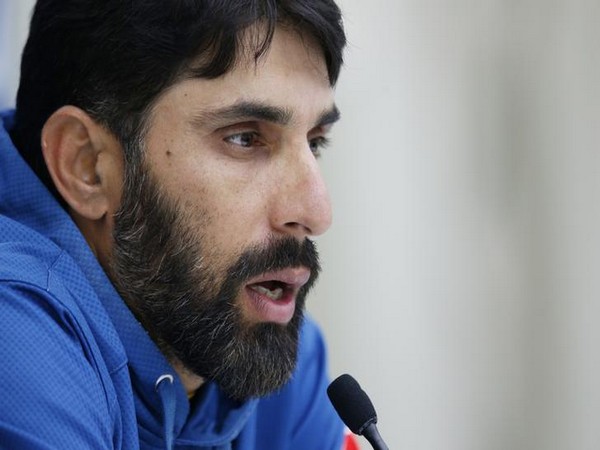 London [UK], Nov 12 : Pakistan head coach and chief selector Misbah-ul-Haq is expecting ‘good results’ from the ‘ambitious team’ as they are preparing for Test series against Australia.

Misbah-ul-Haq led the team when the national side last toured Australia in 2016-17. They were white-washed 3-0 by the hosts.

“For Asian teams in Australia, it’s always difficult but overall the best thing for us is that our batting line-up is experienced. Our boys who have toured previously scored runs here. Azhar Ali, Asad Shafiq and Shan Masood had a good time in the bouncy tracks in South Africa [tour in 2018-19] so looking forward, we have a good mature team,” ESPN Cricinfo quoted Misbah-ul-Haq as saying.

“We have got good, young fast bowlers and Yasir Shah was there with us last time [we toured here]. When [you] have such an ambitious team, you expect good results. The fast bowlers are energetic and all the players are expected to play well in the conditions,” he added.

Australia have already won the three-match T20I series by 2-0 as the first match was abandoned due to rain. Now both teams will compete in a two-match Test series, starting from November 21.

Misbah-ul-Haq said the bowlers are better prepared than their last tour.

“Our young fast bowlers and spinner Yasir Shah are our biggest positives. He [Yasir] is aware of Australian conditions and he also had better preparation playing domestic cricket at home. He bowled lengthy spells there and he exactly knows what was missing during his previous tour here. So, I am hoping that our preparation are better than before,” he said.

We try and produce high standards in every single game: Robertson