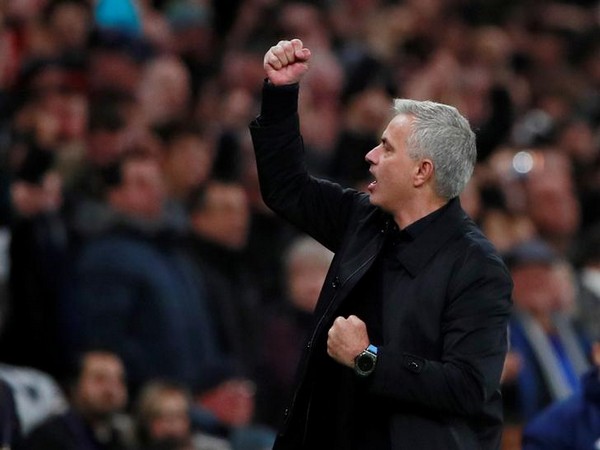 Leeds [UK], Nov 27 : Tottenham Hotspur coach Jose Mourinho has built up the hype for the club’s upcoming documentary as he refused to reveal details about his half-time team talk during the match against Olympiacos in the Champions League.

The club was trailing 2-0 in the Champions League match, but the side was able to register a comeback win. In the end, Harry Kane’s brace helped the team to win the match 4-2.

“I think if you wait a few months and you buy the Amazon movie you will find out. For me it had to be a soft version of myself because it was a bit of a surprise to me,” Goal.com quoted Mourinho as saying.

“I felt that they were in need of some love at that time and not the critical one. I felt there needed to be more of an emotional balance. After that, we talked about a few tactical details, tactical position adjustments but it was more about their confidence, their difficult situation and to go for it,” he added.

Mourinho replaced Mauricio Pochettino as the head coach last week and in his first match as in-charge, Tottenham was able to defeat West Ham United 3-2.

“I think again that it’s not about me, it’s about the team. I just want to help, the fans help, the ball boy helps. Everybody who loves Spurs helped. The players are the most important thing,” Mourinho said.

“Of course my feeling was great, especially because it was one of those matches where I had to play. You know some matches you play before the match in the way you prepare the team. You work, you train, you prepare and then the game starts and the direction in the game is not very important,” he added.

The side will next take on Bournemouth in the Premier League on Saturday, December 30.

Tottenham is currently placed at the tenth position in the Premier League with 17 points from 13 matches.