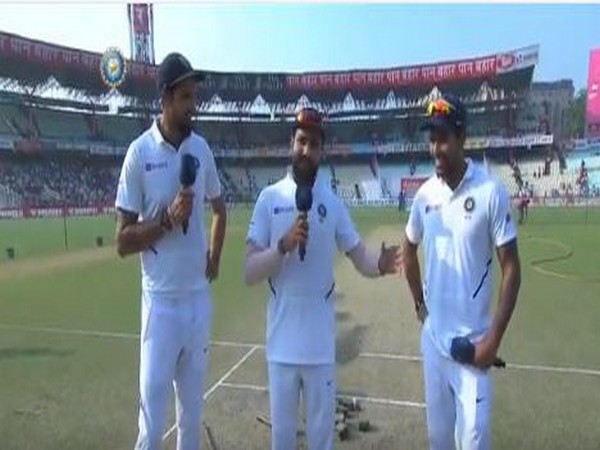 India thrashed Bangladesh by an innings and 46 runs on Sunday at the Eden Gardens.

Board of Control for Cricket in India (BCCI) posted a video where Rohit, Ishant Sharma and Umesh Yadav talked about their performance.

“As you saw, we won the Test match. It was a historic match for us, for the first time we were playing pink-ball Test,” Rohit said at the beginning of the video.

Rohit then asked Ishant about the difference he felt with the pink ball as compared to the red ball when bowling during day and night time.

“It is a very different ball. When we started on day one, the ball was not swinging as much then we communicated with each other and said the ball is not going to swing when you release and the bowler will have to bowl on length, especially during day time,” Ishant replied.

Yadav said he worked on his wrist position when asked whether he has worked on swinging the ball.

“Earlier, my wrist position was different… I talked to my coaches and I felt that when I properly hold the ball then I have more chance to move the ball and have more control,” Yadav said.

Ishant then asked Rohit about the one-handed catch he pulled off to send Mominul Haque back to the pavilion in the first innings.

Replying to Ishant, Rohit said: “When the batsman got the edge, I saw that the ball is coming between me and Virat and it might pass from the gap. I saw in the replay that he came for the catch but in the second slip, if you think that you should go for the catch then you should go and should not go half-heartedly. I went and luckily I got the catch.”