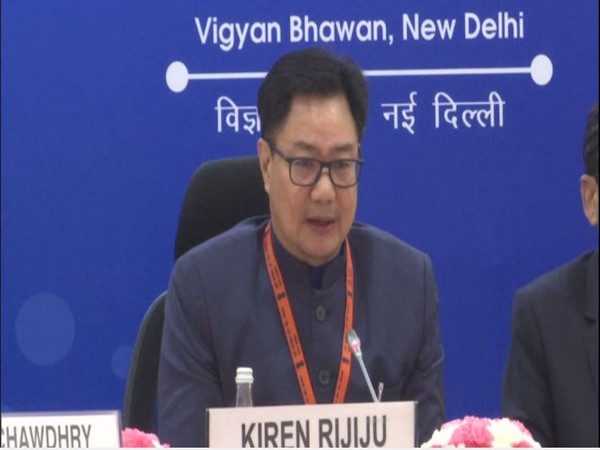 New Delhi [India], Nov 16 : Kiren Rijiju, Union Minister for Youth Affairs and Sports said that India is fast emerging as a ‘sporting powerhouse’ and it is his dream to see the country feature among top-ten nations in the 2028 Olympics.

“India is emerging fast as a sporting powerhouse. Every player comes from a state. Some states are playing a very pro-active role when it comes to sports, priority should be given. We have a dream that India finishes in top-ten of the medal tally in 2028 Olympics,” Rijiju said during his inaugural address at the Conference of Ministers and Secretaries of the States and Union Territories.

“We should think of a target, winning one-two medals won’t work. We are a big nation, we have to go aggressively and all governments must give priority to this. If you win medals, you celebrate. But what about those who do not win medals? How will we create a sports culture in the country? We must decide how important it is to take part in different sports. We have to create a sports culture,” he added.

He also called upon states and union territories (UTs) to work with the centre towards making the country a sporting superpower.

“It is very important that we sit together and decide on our future course of action. If we work as a team, then we can achieve a lot. There are over 80 lakh volunteers working in different programmes of the Centre,” Rijiju said.

“The ministry has large human capital at their disposal. On October 2, we did a plogging run and over 24 lakh volunteers participated in it. It was one of the largest human participation in the world, it was huge. We should realise our strength,” he added.

The Sports Minister also brought up initiatives like ‘Khelo India’ and ‘Fit India Programme’. He said the programmes have started yielding results, but the states and UTs should try to make it a citizen’s programme.

“PM Modi has launched a few big programmes. Among those, one is Fit India. Wherever I go, everybody is talking about fitness. The young population must be fit, but our rating in the World Fitness Index is not very encouraging. Fit India Movement should become a citizen’s movement, and it will become that when every state government adopts it,” Rijiju said.

Indore Test: India declares overnight with a lead of 343 over Bangladesh

Finishing at the number one spot, an achievement for all year round: Rafael Nadal