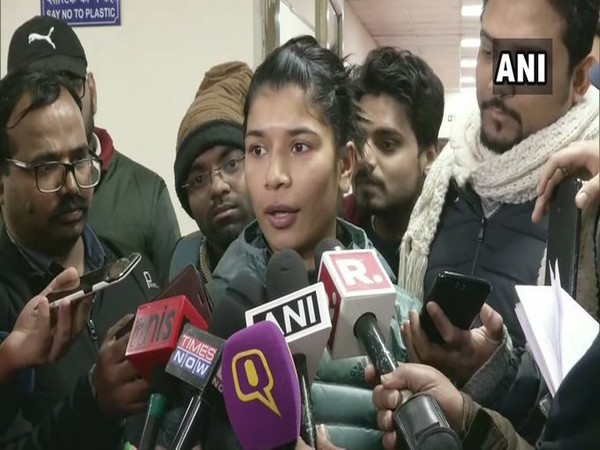 New Delhi [India], Dec 28 : Boxer Nikhat Zareen, after losing an Olympic Qualifiers trials final bout against Mary Kom, said that she ‘felt hurt’ after the latter refused to shake hands with her as she did not expect such behaviour from seniors.

“I did not like how she behaved with me. When the decision was announced and I tried to hug her but she did not hug me back. Being a junior I expect seniors to respect us too. I felt hurt but that’s okay I don’t mind,” Zareen told reporters here.

Kom defeated Zareen 9-1 in the 51kg category final bout. Talking about the clash Zareen said she is happy with her performance and termed the match ‘close’.

“I think I have given my best. I’m happy with my performance though I did not win, I won the hearts. The bout was close and it could have gone either way,” the boxer said.

When asked about how was six-time world champion Kom’s behaviour in the ring she said, “In the ring, she used some bad words for me and I don’t want to react on that right now.”

“Recently BFI president has announced that if Kom does not qualify for 51Kg category than there will be another trial. If it gonna happen then I will be preparing and looking forward to that,” she added.

Zareen will next be preparing for the competitions in Serbia and Turkey and she believes that her name will be announced for the latter event.

“Why should I shake hand with my opponent Zareen,” remarked Kom after registering a win against Zareen.

“Why should I shake hands with her? If she wants others to respect her then she should first respect others. I don’t like people with such nature. Just prove your point inside the ring, not outside,” Kom told reporters.

Earlier this year, Zareen had demanded a ‘fair chance’ to contest the Tokyo Olympic qualifiers. On October 17, Zareen had written to the Sports Ministry challenging the Boxing Federation of India’s (BFI) decision to accommodate world champion Kom by changing its rule of exempting gold and silver medallists from the World Cup.