Coming at the second number Melbourne’s Hisense Arena will be known as Melbourne Arena. 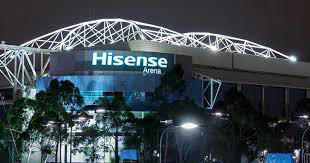 In the same manner when Etihad Stadium becomes Marvel Stadium this year, now Hisense Arena will be called Melbourne Arena for a period of at least next five years. Tennis Australia bought the naming rights to the venue “so we had the opportunity for this to be named Melbourne Arena,” TA chef executive Craig Tiley said.

“What a great way to pay homage to the Melbourne sports and entertainment fan – renowned globally for their knowledge and passion.” Minister for sports, tourism and major events John Eren highlighted that it was a chance to uplift Melbourne brand to life internationally.

The tennis grand slam, Australian open tennis series is scheduled to happen in the Melbourne Park until 2036. However, it is not certain that the name will remain intact till that long.

Melbourne Arena has been both a music and sports venue. BB King has played in the room as well as The Killers.

“Since 2000 this fantastic venue has hosted headline acts from the Australian Open to The Killers. It’s fantastic to now see the sporting capital of Australia, Melbourne up in lights for the world to see,” Minister for Tourism and Major Events John Eren said.

“We’re proud to work with our precinct partners like Tennis Australia to ensure Victoria’s major venues like Melbourne Park maintain their edge and continue to serve up the world’s best sport and entertainment.”

The venue has already started functioning under the new name with its new signage besides websites and social media pages will only be changed within a month.

Top seven gym equipment transforming your home to a gym !