Sankaranarayana Menon, he is not a new name in the field of Kalaripayattu, but now he is again in the news for something even bigger than that.

73rd Republic day of India was not a new thing for him, he woke up at his time, from his court and did his natural call what he always do. His disciples was waiting for their master on his court.

But today there was a brief round of applause for his achievement, announced by the Government on Tuesday night, he was awarded with Padma Award for his contribution, but no excess celebration. “I am obviously glad that the Government has recognised me. But it’s not the end. I will continue teaching students as long as I am alive. It’s my duty,” he says, in a soft but clear voice. 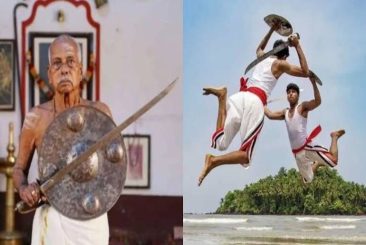 These days, his body can’t take the rigours of demonstrating the intricate steps (“adavu”) on a daily basis. So he restricts himself to reciting instructions in a metrical, singsong slang, almost like folk poetry, passed onto him by his forefathers.

Yet,  Sankaranarayana Menon says he can still perform most steps “without breaking a bone or pulling a muscle”. The movements are no longer muscle memory, but memory itself. “I have been practising those moves since I was seven, so it has become a part of me, like my mind. I feel I need to finetune some of the steps,” he says.

In the best traditions of kalaripayattu, Sankaranarayana Menon has a taut and supple frame. Says his son Krishnadas: “We don’t look to build big muscles like pehelwans, but rather compact muscles that give us flexibility and make reflexes stronger. My father had a perfect kalaripayattu physique and, in his prime, was known for his dexterous moves.”

Sankarnarayana Menon took baby steps in Tirur, now in mallapuram district and had family members in army of Vetatthu Raja, a local chieftain. But later on when Princely states disintegrated after Independence, his family was jeopardised by several prevailing situations and Modern Combat forms came into being reducing Kalaripayattu and its fame.But he never fell pray in hands of situations he worked hard and sprung the academy from the scratch by his sweat and blood.

Menon and his family never gave up, though. “My father never thought of quitting. Neither did he dilute his teaching nor make it expensive. Whatever the student could afford, is his guiding principle,” says Krishnadas, who also heads the Kerala Kalaripayattu Association and is the go-to consultant for martial arts, an evergreen genre in the Malayalam film industry.

Krishnadas says the upturn of fortunes began with the tourism boom in the state. “In the mid-1980s, a man came from Belgium I guess, and after years of training under father, went home and opened a centre of his own. And then, more people began to come. As a tradition, we permit only those who have trained under us to open branches anywhere in the world,” he says.

Menon’s sons are seasoned pros themselves, which allowed him to take a break from teaching. But Unni Gurukkal, as Menon is fondly called, insists on teaching himself those who knock on the doors of his kalari. “It’s not in our tradition to send them back. Those who come for knowledge shall get knowledge,” he says.

Time has come for Deepak Hooda, In ODI team against WI