For all the hockey fans, recent days were heartwrenching. Indian Hockey stalwart and Tokyo Olympics 1964 Captain Charanjit singh passed away due to age related disorders at his house in Una, Himachal Pradesh.

Charanjit Singh was born on 22nd November 1930 at Mairi village in Una district of the State. An alumnus of Col. Brown Cambridge School, Dehra Dun, and Punjab University, he was also a part of the team that won the silver medal at the Rome Olympics in 1960.

After retiring from hockey, Charanjit Singh worked as Director of Department of Physical Education at Himachal Pradesh University, Shimla. 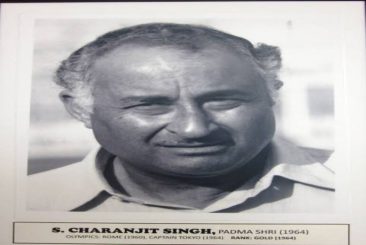 Pakistan team was defending champion that year but they lost to India in game with 0-1 score.

The Tokyo Olympics were the first Olympics to be held on Asian soil. India made a bold bid to regain her lost supremacy in world hockey. India was coached by Habul Mukherjee, who used to play hockey in a dhoti in his heydays. The team went on a two-and-a-half month tour to New Zealand and Malaysia before heading to Tokyo.

In the pool matches, India finished at the top with 12 points. India beat Belgium 2-0, was held to a draw by both Germany and Spain, beat Hong Kong 6-0, Malaysia 3-1, Canada 3-0 and Holland 2-1. In the semi-final, India beat Australia 3-1 to set up their third consecutive clash with Pakistan in the Olympic finals.

Govt Awards Padma Shri to Sankaranarayana Menon For His Kalaripayattu