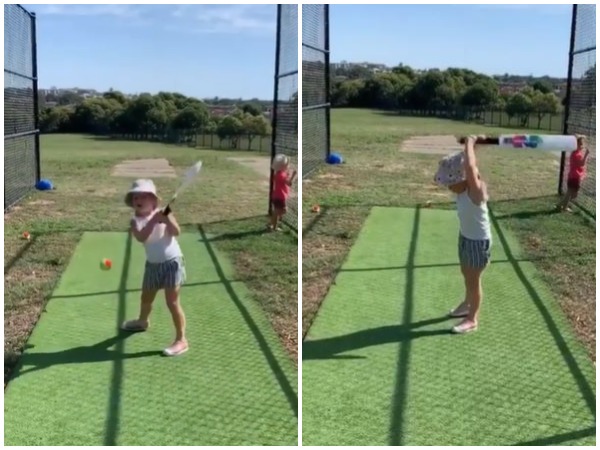 New Delhi [India], Feb 3 : Australia swashbuckling batsman David Warner on Monday shared a video in which her daughter lost her calm and smashed the bat on the ground while batting.

The five-year-old, Ivy Mae Warner, was heard saying “don’t spin the ball’ in a video posted by David on Instagram.

Ivy was seen waiting for the ball, and once she misses the delivery, she can be seen hurling the bat with anger on the field.

Taking to Instagram Warner captioned the video, “It’s fair to say Ivy needs to listen and control her emotions. What would dad know #toofunny @candywarner1.”

It’s fair to say Ivy needs to listen and control her emotions 😂😂. What would dad know😂😜😜 #toofunny @candywarner1

Earlier in November last year, Ivy said: “I am like Virat Kohli” while playing with her father at their home.

On the work front, Warner last played against India in the three-match ODI series. The opener amassed 146 runs in the series including a century in the first game.

Australia will next tour South Africa to play three T20Is, followed by as many ODIs. The first T20I will be played at Wanderers Stadium in Johannesburg on February 21.