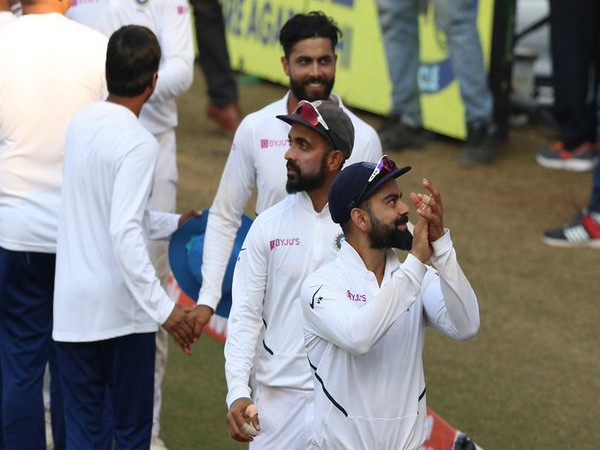 New Delhi [India], Nov 16 : The cricket fraternity has lauded India’s win over Bangladesh by an innings and 130 runs on Saturday.

“An innings win! @imVkohli breaks another record as captain! Most innings wins as Test captain is a great achievement. What a fantastic team effort by #TeamIndia. #INDvBAN,” Singh tweeted.

In the first Test of the two-match series, India showcased a spirited performance to lead the series by 1-0.

Bangladesh in their second innings too struggled to score big runs on the scoreboard and was bundled out on 213 on day three at the Holkar Cricket Stadium in Indore.

This win is also India’s sixth consecutive win for the team in the longest format of the game.

Former batsman Mohammad Kaif took to Twitter and wrote, “Fantastic win for Team India and so great to see our fast bowlers creating havoc and fear in the minds of the batsman. #INDvBAN.”

“One more comprehensive win for Team India. While the batting was excellent, it was very exciting to see the way the three Indian quick bowlers intimidated the batsmen. Complete team performance. #INDvBAN @StarSportsIndia,” VVS Laxman tweeted.

Earlier, Bangladesh won the toss and elected to bat first which turned out to be a bad decision as they were bowled out on 150 in their first innings.

India scored a total of 493/6 after which they declared their innings on day three. Mayank Agarwal registered his second double-ton of his career as he scored 243 runs with the help of 28 fours and eight sixes.