Conor McGregor, the ‘notorious’ has launched a whiskey Proper No. Twelve Irish whiskey.

Conor McGregor who has earlier announced about the whiskey blend as ‘Coming Soon project Notorious” at last year with Floyd Mayweather on the stage.

The MMA Superstar who has made news due to his talks and rapid action in the octagon ring, McGregor got millions of fans across the world.

McGregor announced the unveiling of his Proper Twelve whiskey brand via Instagram. 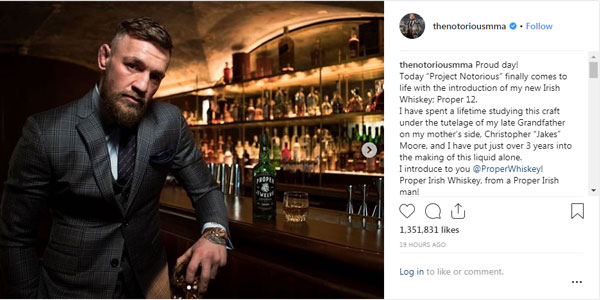 McGregor has infused four years working on the project “Notorious”, which finally became Proper No. Twelve finally. Under the project, McGregor bought the world’s oldest whiskey distillery- located in Ireland- with a proven history of qualitative whiskey making. During the project, he met David Elder  a seasoned master distiller and working along with him, they created the brand. McGregor said via press release “We created close to one hundred blends and ultimately selected what we knew was the one and only proper whiskey blend. We took the time to develop an incredible whiskey and I’m excited to share it with the world.”

Now the brand Proper Twelve gets its brand name which has some special connection with Dublin. As McGregor stated “Born and bred in the Dublin suburb of Crumlin, Dublin 12. Proper Twelve is who I am“ he added more “I wanted to make an Irish whiskey emblematic of Irish culture as a whole, and something that would showcase the great skill we possess of distilling the best Whiskey in the entire world.”

The former lightweight MMA champion is all set to return to the Octagon on October 5th after nearly a span of two years, when he will meet undisputed lightweight champion Khabib Nurmagomedov in the main event of UFC 229 at T-Mobile Arena in Las Vegas.