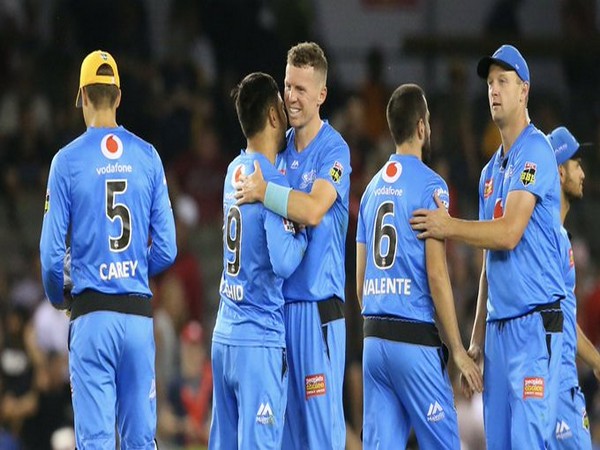 Melbourne [Australia], Dec 29 : The all-around performance by Adelaide Strikers earned them an 18-run victory over Melbourne Renegades at the Docklands Stadium here on Sunday.

Rashid Khan was adjudged the Player of the Match for picking up two wickets and adding 25 runs. Chasing a moderate target of 156, Renegades were restricted at 137/8 in the allotted 20-over.

Skipper Aaron Finch and Beau Webster were the only two batsmen to score above 30. Finch played a knock of 50 runs while Webster remained unbeaten at 37 runs.

Marcus Harris, Sam Harper, and Daniel Christian failed to leave their mark on the scoreboard and were dismissed cheaply.

Earlier, Adelaide Strikers won the toss and elected to bat first. They put a total of 155 for the loss of six wickets in 20 overs.

Opener Phil Salt scored 54 runs off 26 balls and skipper Alex Carey’s cautious knock of 41 helped the side to reach a respectable total.

Jonathan Wells and Rashid Khan too added some crucial runs to the scoreboard in the late overs. Wells scored 20 runs while Khan smashed quick 25 off 16 deliveries.