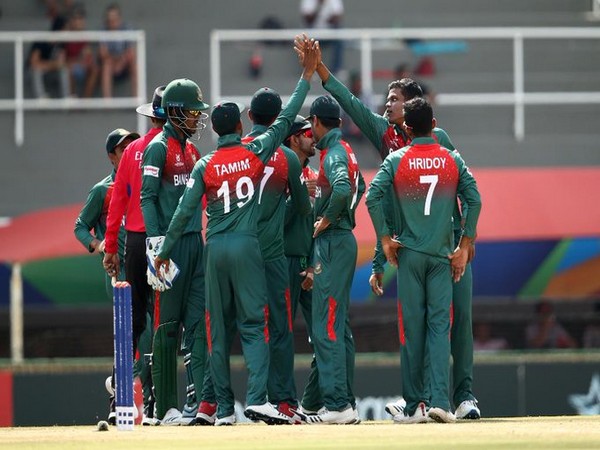 With this victory, Bangladesh have secured a place in Super League semifinals.

Chasing 262, South Africa started their innings at a slow pace and lost their opener Khanya Cotani (15) in 10th over.

Jonathan Bird (35) who looked settled was dismissed b Rakibul Hasan in 14th over. Proteas lost the flurry of wickets, reducing the side to 77-4. Luke Beaufort and Jack Lees tried to consolidate the innings and took the side past 110-mark.

After the dismissal of Lees (19) in the 32nd over, the host suffered a sudden collapse and were reduced to 153-8. Only Beaufort looked in control as he smashed half-century for the team.

After being put in to bat first, Bangladesh got off to a good start as the openers stitched a 60 runs stand between them for the first wicket. However, Bangladesh suffered two blows after the dismissal of Pervez Hossain Emon (17) and Mahmudul Hasan Joy (3), reducing the side to 73-2.

Tanzi Hasan and Towhid Hridoy played aggressively and stitched a partnership of 57 runs for the third wicket. Tiaan Van Vuuren took the wicket of Hasan (80) in the 28th over. Shahadat Hossain then joined Hridoy and the duo partnered for 98 runs, as they took the side past 230 run mark.

Hridoy got out after smashing 51 runs off 73 balls while Hossain remained unbeaten on 74* and powered the side to 261 runs in 50 overs.