Bajrang Punia and Vinesh Phogat, being Indian wrestlers, apart from being the winners of the Rajiv Gandhi Khel Ratna award for the years 2019 and 2020 respectively had been a part of an event that was organized and conducted by The Sports Authority Of India’s Northern Regional Centre at Sonepat. A total of 391 participants attended as well as interacted in the session on Fit India Freedom Run which was conducted online. The event had taken place for a period of one hour and thirty minutes. Lalita Sharma, Regional Director, SAI NRC Sonepat had inaugurated the event. Athletes and coaches from SAI Sonepat and other SAI centres from various places in Haryana such as Kurukshetra, Rohtak, Bawana, Bhiwani, Hisar  had participated in the event. The members of the print and electronic media had also attended the event. Currently, the High Performance Director of Sports Authority of India, Pushpendra Garg who is also a former Rajiv Gandhi Khel Ratna awardee had spoken on the various benefits that fitness offers to individuals, apart from mentioning about Fit India Freedom Run. The closing remarks were subsequently made by Satish Sarhadi, who is the CEO of Sai National Boxing Academy in Rohtak.

Bajrang Punia spoke on how fitness was important for helping build a successful nation. He further pointed out that in the cases of nations that have been successful, fitness had indeed played an important role. Bajrang Punia also encouraged athletes to stay fit at all times and also maintain a proper and healthy diet, so that they can achieve their goals, including their most important goal of winning an Olympic Medal.

Vinesh Phogat heaped praises on the Prime Minister’s initiatives, including that of the Sports Minister by also mentioning that sports persons too had a responsibility towards society. She also stated that she had gained immensely from remaining fit. Moreover, she added that if everyone remains fit and healthy, it would be a great source of encouragement for them. Further, she mentioned that those who had remained fit during the pandemic had been able to recover faster from the disease. Additionally, she went on to state that the Prime Minister had done a lot for encouraging sports in the country and in the last 5-6 years Indian sports had been passing through a good phase. Further, she stated that sports persons must set an example for the society and also went on to thank the Prime Minister and the Sports Minister for their contribution towards Indian sports.

Former Arjuna Awardee and a gold medalist, Amit Saroha stated that disability cannot be a reason or seen as a limitation that should prevent anyone from remaining fit. By stating that even though he was wheelchair bound and could not run, it cannot be cited as a cause by individuals to prevent them from staying fit. He suggested that people can do yoga which would help them stay fit. Finally, he stated that if the citizens of the country stay fit, the country would also progress quickly.

Akhil Kumar, one of the boxers and a recipient of the Arjuna award mentioned that if individuals are fit and strong, they can recover from their injuries faster and better. He further suggested to his fellow athletes to ensure that they maintain proper health and fitness at all times and take good care of their health by consuming healthy food.

Deepika Thakur, a women’s hockey player and an Arjuna Awardee shared her thoughts on fitness. She mentioned about her motherhood experiences, wherein she had been trying to spare an hour every morning to do her fitness exercises, although she had experienced many difficulties. She further added by saying that if she could take time out for exercises despite having a baby to take care of, others should also be able to spend time for keeping fit.

Many other speakers had also attended the event such as Anita Kundu, a mountaineer and winner of the Tenzing Norgay National Adventure Award this year. Besides, it also included speakers  such as Om Prakash Dahiya, a wrestling coach and Dronacharya Awardee for this year, Poonam Beniwal, High Performance Manager of Sports Authority of India and  Manpreet Singh, a Kabaddi coach and a Dhyan Chand awardee for this year who had attended the event.

Shisham Jain, a Fitness Entrepreneur Shares his Insights Over The Contemporary Fitness Industry and Struggles Within 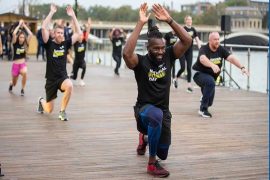