Around the globe, professional sports venues are doing their part to combat climate change and employ sustainability. This isn’t a particularly new development—stadiums and arenas at the vanguard of the sustainability movement have implemented eco-friendly practices for decades.But ‘going green’ is more than a one-and-done initiative. Thanks to technological advances, the ways venues incorporate sustainability are vaster than ever and impact every conceivable facet of operations. At Ashton Gate, a football and rugby stadium in Bristol, England, solar panels were installed as part of a facility overhaul in 2016.

Fast forward three years, and the home venue of the Bristol City Football Club offers a compelling case study on how locally-produced renewable energy meets the long-term sustainability vision of a stadium and a city.

Seizing an Array of Opportunity

Opened in 1887, Ashton Gate was an aging behemoth in need of modernization. After a lengthy planning phase by stadium officials and the Bristol City Council (BCC), an ambitious two-year, £45m facility redevelopment program launched in May 2014.

The work included replacing two grandstands and extending a third, increasing the Ashton Gate seating capacity to 27,000. The pitch was renewed and shifted. Upgraded technology was installed around the venue, including the addition of a 117 kWp solar PV array on the grandstand roofs.

The stadium teamed up with supplier EvoEnergy to procure and install the solar panels. BCC kicked in funds to pay for the project from a city-wide program to curb carbon emissions. This funding is available to any Bristol business taking measures to reduce its carbon footprint.

In total, Ashton Gate was fitted with a robust renewable energy system comprised of 460 Vikram 255W panels. A four-man team completed the work in just seven days, ensuring the solar panels were ready to go in time for the start of the 2016-17 football season. 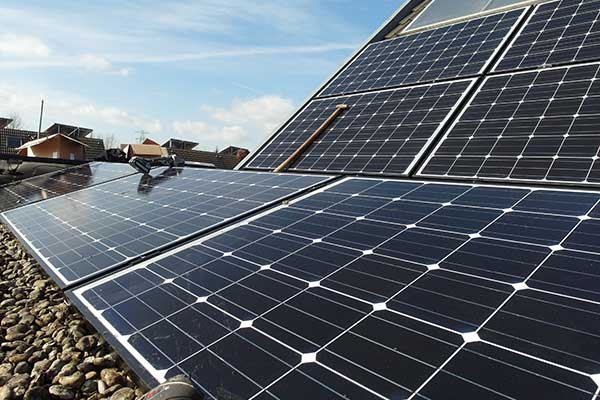 The solar array at Ashton Gate is performing as promised three years after installation.

The system produces around 96 megawatts per hour of use, or 95,090 kWh each year. That’s enough energy to power 23 average-use homes annually. All energy produced by the solar array is consumed on-site at Ashton Gate.

Additionally, the facility’s carbon emissions have been reduced by 20 percent, with an estimated cost savings of £150,000 predicted over 20 years.

While renewable energy is always winning at Ashton Gate, the solar panels may even be powering the football club this season.

Bristol City is scrappy on the pitch so far in the 2019-20 Championship campaign. The Robins dropped the season opener to Leeds before drawing against Birmingham and winning over QPR. In a recent match expected to result in a draw, manager Lee Johnson’s club bested Derby 2-1.

Brushstrokes in the Bigger Picture

The solar array at Ashton Gate is just part of the overall plan to transform Bristol into an energy-independent city.

By 2020, Bristol aims to reduce its carbon emissions by 40 percent, as compared to 2005 consumption levels. A 30 percent reduction in energy use is slated for the same period.

The end goal is a city supplied entirely by renewable energy by 2050.

It’s a bold-yet-attainable objective as Bristol works with partners around the city to promote sustainability one entity at a time. BCC’s collaboration with Ashton Gate demonstrates a very real commitment to that green mission.

Bristol is rapidly evolving into a model city of renewable energy and social responsibility. Ashton Gate, which previously consumed all of its energy from the grid, has seen a reduction in costs and carbon emissions thanks to a solar array installed three years ago. If the success of this project is any indication, Bristol is on track to meet its aggressive renewable energy goals by 2050.

Bumrah inning heroics in Antigua is one of the best: Arun