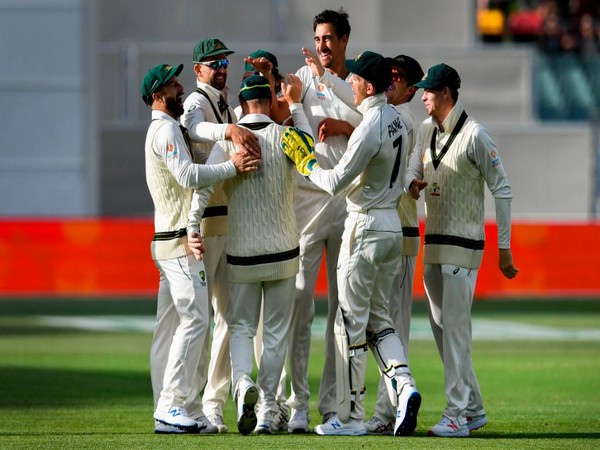 Adelaide [Australia], Nov 30 : Pakistan were trailing by 493 runs in the day-night Test against Australia on day two at Adelaide Oval here on Saturday.

Opener Shan Masood played a knock of 19 runs before being caught by Tim Paine behind the stumps off Josh Hazlewood, reducing the team to 38/3.

Babar Azam and Asad Shafiq built a stand of 31-run for the fourth wicket. Shafiq was picked by Starc after playing a knock of nine runs.

Iftikhar Ahmed (10) failed to score big runs and was sent back to the pavilion by Starc.

Mohammad Rizwan failed to leave his mark on the scoreboard and was too dismissed by Starc on a duck.

Azam and Yasir Shah are unbeaten on 43 and 4 runs respectively. Pakistan were at 96/6 at stumps on day two of the pink-ball Test.

For Australia, Starch bagged four wickets while Cummins and Hazlewood scalped one wicket each.

Earlier in the day, Australia declared their first innings on 589/6. David Warner (335) and Marnus Labuschagne (162) guided the team to a massive score.

Warner went past Mark Taylor and Don Bradman to register the second-highest individual score for Australia in the longest format of the game.

Steve Smith, who played a knock of 36 runs, became the fastest batsman to score 7000 runs in the longest format of the game.

More to come, says Gnanasekaran after being knocked out of ITTF World Cup