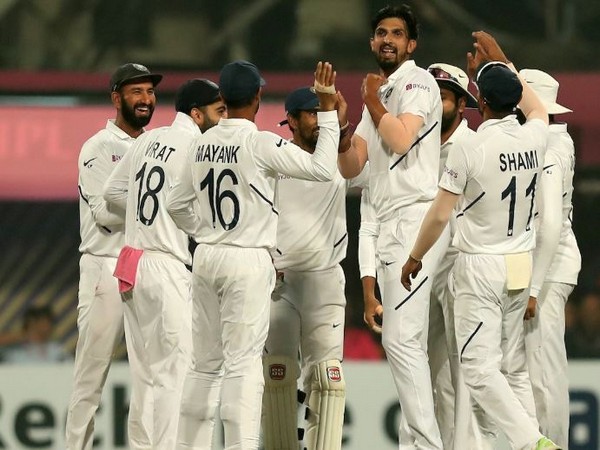 Kolkata [West Bengal], Nov 23 : India continued their dominance over Bangladesh, who are trailing by 89 runs, and have only four wickets in hand after the conclusion of day two of the second Test match here on Saturday.

The visitors, who were trailing by 241 runs, had a very poor start to their second innings. They quickly gave away three wickets. Shadman Islam and Mominul Haque were dismissed on a duck while Mohammad Mithun scored six runs before Umesh Yadav took his wicket.

Ishant Sharma then took the wicket of Imrul Kayes, reducing Bangladesh to 13/4.

Mahmudullah and Mushfiqur Rahim took the charge and formed a 69-run partnership which provided the visitors with some momentum. However, Mahmudullah, who was playing at 39, retired hurt which brought Mehidy Hasan on the field.

Rahim went on to score his half-century but Mehidy was caught behind on 15 off Sharma’s delivery. Taijul Islam then came out to bat but failed to leave a mark as he was dismissed by Umesh Yadav, reducing Bangladesh to 152/6. Sharma took four wickets in the second innings.

Earlier, after resuming the day two from 174/3, India had a brilliant start with Ajinkya Rahane and Virat Kohli smashing boundaries at regular intervals.

The duo formed a 99-run partnership before Taijul Islam gold hold of Rahane (51). Ravindra Jadeja was the next batsman but only managed to score 12 runs before Abu Jayed bowled him.

Soon after, Kohli too was dismissed. However, the skipper smashed his 27th Test century before returning to the pavilion, scoring 136 runs.

After Kohli’s dismissal, India kept on losing wickets and when Wriddhiman Saha and Mohammed Shami were playing at 17 and 10 respectively, they declared their first innings at 347/9.

Our fast bowling attack has improved a lot: Cheteshwar Pujara