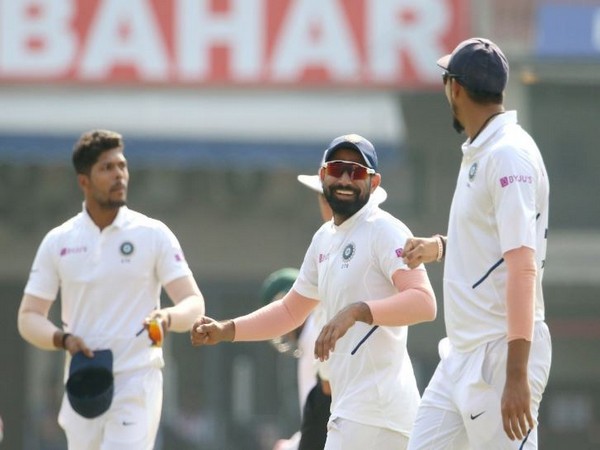 Indore (Madhya Pradesh) [India], Nov 16 : India defeated Bangladesh by an innings and 130 runs on the third day of the first Test match here on Saturday at the Holkar Cricket Stadium. It was the sixth consecutive victory for the team in the longest format of the game.

With this victory, India have consolidated their first position on the ICC World Test Championship points table, as they now have 300 points.

Bangladesh, who were 343 runs behind, had a poor start in their second innings as both openers, Imrul Kayes and Shadman Islam, were back in the pavilion within seven overs.

Mohammad Mithun and Mominul Haque then took over, but the latter only managed seven runs before he was out LBW to Mohammed Shami. In his next over, Shami got rid of Mithun (18) as well.

Their dismissal brought Mahmudullah and Mushfiqur Rahim to the field. They had a 28-run partnership before Shami struck again and dismissed Mahmudullah (15). Liton Das then came out to bat.

Rahim and Das had a 63-run partnership. Ravichandran Ashwin provided India with the breakthrough as he caught and bowled Das, who scored 35 runs. Mehidy Hasan came out next.

Rahim completed his half-century and added 59 runs with Hasan. Umesh Yadav then bowled Hasan (38) to take India closer to the victory. Taijul Islam came out to bat but only managed to score six runs before he was caught behind off Shami’s delivery.

Soon after, Rahim (64) too was sent back by Ashwin. India did not take much time to secure a win as Ashwin, in his next over, dismissed Ebadat Hossain.

Earlier, India declared their first innings at 493/6. Mayank Agarwal registered his second double-ton of his career as he scored 243 runs with the help of 28 fours and eight sixes.

On day one of the match, India had bundled out Bangladesh for a below-par score of 150 runs.