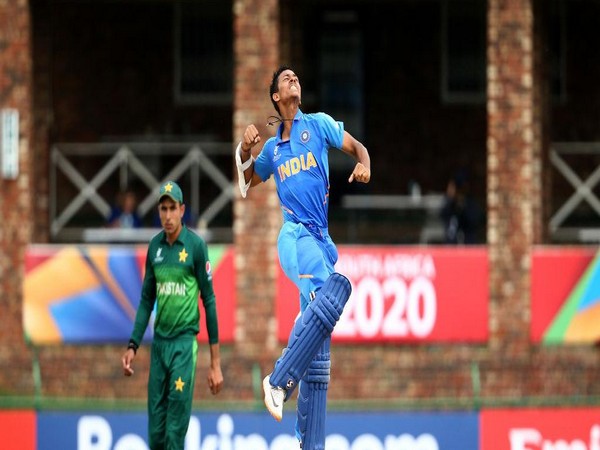 Potchefstroom [South Africa], Feb 4 : Yashashvi Jaiswal on Tuesday became the fifth batsmen in the U19 World Cup history to score a century in the knockout clash.

The left-handed Indian batsman played an unbeaten knock of 105 runs to register a comfortable ten-wicket win over Pakistan in the semifinal at Senwes Park.

Jaiswal scored his maiden hundred of the tournament. Interestingly, all the five batsmen who have scored centuries in the semifinal or final are Indians and they all remained unbeaten in their respective matches.

His parents were happy in his home town Bhadohi, a small town in Uttar Pradesh, after his spectacular performance in the semifinal clash.

“He performed very well today. He performs well under pressure. He is focused on winning the World Cup. He promised that he would give his best performance,” Yashasvi’s mother, Kanchan Jaiswal, told ANI.

“We are feeling very proud. We were watching the match and he played well under pressure,” Yashasvi’s father, Bhupendra Jaiswal, said.

Unmukt Chand and Cheteshwar Pujara are the other two batsmen who have scored a hundred. Chand smashed 111* in 2012 final while Pujara amassed unbeaten 129 in 2006 semifinal.

India will now face the winner of the second semifinal between New Zealand and Bangladesh at Senwes Park in Potchefstroom on Sunday, February 9.