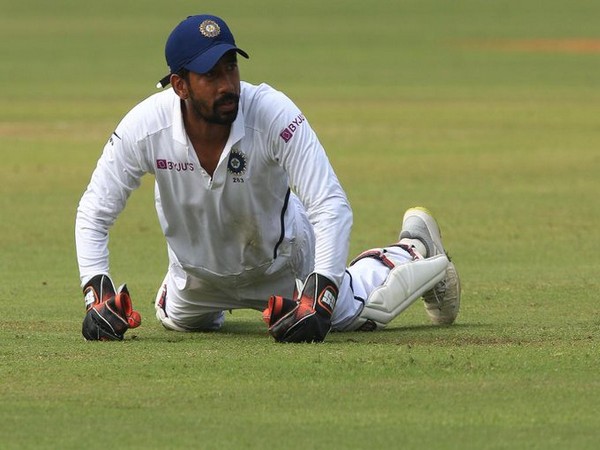 Mumbai (Maharashtra) [India], Nov 27 : Wicket-keeper batsman Wriddhiman Saha has undergone surgical fixation of fracture on his right ring finger, the Board of Control for Cricket in India (BCCI) confirmed on Wednesday.

Saha had sustained the fracture during the recently concluded day-night Test between India and Bangladesh.

“Wicket-keeper Wriddhiman Saha sustained a fracture on his right ring finger during the recently concluded Pink ball Test in Kolkata against Bangladesh. The BCCI Medical Team consulted a hand and wrist specialist and it was suggested that Saha undergoes a surgical fixation of the fracture,” BCCI said in an official statement.

“Subsequently, he underwent successful surgery in Mumbai on Tuesday and will soon commence his rehabilitation at the National Cricket Academy, Bengaluru,” it added.

During the pink-ball Test, Saha had become the fifth Indian wicket-keeper to affect 100 dismissals in the longest format of the game.

The 35-year-old Saha affected two dismissals in Bangladesh’s first innings. He affected his 100th dismissal when Umesh Yadav had Shadman Islam (29) caught at the hands of the wicket-keeper.

Former skipper MS Dhoni has affected the most dismissals for an Indian keeper in the longest format of the game. He has 294 dismissals to his name.

Apart from Dhoni and Saha, Syed Kirmani, Kiran More and Nayan Mongia are the other wicket-keepers to have affected 100 dismissals in Tests.