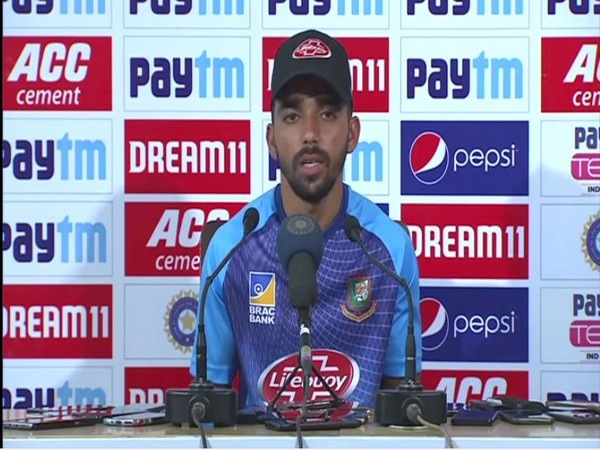 Kolkata (West Bengal) [India], Nov 24 : After facing a 2-0 defeat against India in the two-match Test series, Bangladesh skipper Mominul Haque on Sunday said that he would not give any excuse for the team’s loss as the side was not able to perform well.

His remarks came after side’s loss by an innings and 46 runs in the day-night Test here at the Eden Gardens.

“There is no reason to give excuses, I won’t give any excuse, as a team we were not able to perform well and we were not able to stay at the crease for a long time. We batted in a disappointing manner. India has one of the best bowling attacks in the world, they understand how to execute their skills and they have a good sense of reading the match situation”, Mominul told reporters after the end of the day-night Test.

“It is a disappointing result and obviously you feel bad when you are not able to win. From this series, we can learn a lot. Team-wise, everyone would take a learning curve and from the next series, they will come out better. Both technical and tactical aspects need to be better in our side,” he added.

Bangladesh had lost the services of both Shakib Al Hasan and Tamim Iqbal before the series against India.

Shakib had been banned by the ICC’s ACU for two years with one year being suspended for not reporting a match-fixing offer while Tamim opted out of the tour due to personal reasons.

“Obviously, we missed Shakib and Tamim. Just because we lost, we should not give the excuse that both of these players were not here. We as playing unit were not able to grab the opportunity,” Mominul said.

The visitors failed to leave a mark with bat in hand as they registered scores of 106 and 193 in first and second innings of the match respectively.

“The decision was not wrong. If not here, then someday we would have played the pink-ball Test. India also did not play a pink-ball Test before this, the decision was right in my opinion. There is a lot more challenge with the new ball in day-night Tests,” Mominul said.

“If we could have started well with the new ball, we could have grabbed the opportunity. We were not able to start well and it mattered a lot,” he added.

Haque also expressed hope that the side would get better in playing the longest format of the game as Bangladesh has almost 10 Tests scheduled in the coming year.

“As a team, we were not able to play in a good manner. there is a lot of scope for improvement. We don’t play as much Test matches, but we have almost ten matches in the coming year and we will get experienced in playing the longest format of the game,” Mominul said.

Felt like an IPL match: Virat Kohli on playing under lights during day-night Test