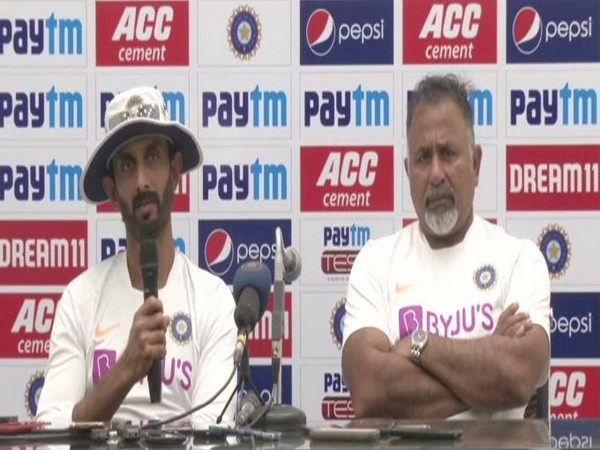 Indore (Madhya Pradesh) [India], Nov 16 : After an innings and a 130-run loss in the first Test against India, Bangladesh Test skipper Mominul Haque said that the team did not bat well in the match.

Bangladesh in their first innings were bundled out for 150 while in the second innings they were restricted to 213 runs.

Apart from Mushfiqur Rahim, who scored 43 and 65, no other batsman was able to score big runs in the game.

“We didn’t bat well though we had some positive things. Mushfiqur batted well in both the innings and Liton did well. Miraz at some point batted well. We failed to play as a team. It was not a good batting performance,” Haque told reporters.

“I think we have to play a lot of Test matches. In the last seven months, we played only one or two Test matches and we did not play much Test games as others. I think it is the main difference,” he added.

Earlier, Bangladesh won the toss and elected to bat first which turned out to be a bad decision. India scored a total of 493/6 after which they declared their innings on day three. Mayank Agarwal registered his second double-ton of his career as he scored 243 runs with the help of 28 fours and eight sixes.

It was the sixth consecutive victory for the team in the longest format of the game. With this victory, India have consolidated their first position on the ICC World Test Championship points table, as they now have 300 points.

The visitor failed in every department of the game. Citing the same, Bangladesh skipper said that the side can learn from the Indian bowlers.

“We can learn a lot of things from Indian bowlers like how they use the new ball and the reverse swing as well. We have to forget about this thing and have to look forward as we have another opportunity in Kolkata,” Haque said.

“Definitely we are happy with the ICC Test Championship as it is the big opportunity for every player to play Test matches. If ICC didn’t arrange these types of tournaments we did not get the games to play and it is doing better for everyone,” he added.

India will now play against Bangladesh in the second Test which will be a day/night match played with a pink ball at Eden Gardens in Kolkata from November 22-26.

We were really not expecting match against Bangladesh to end in three days: Vikram Rathour