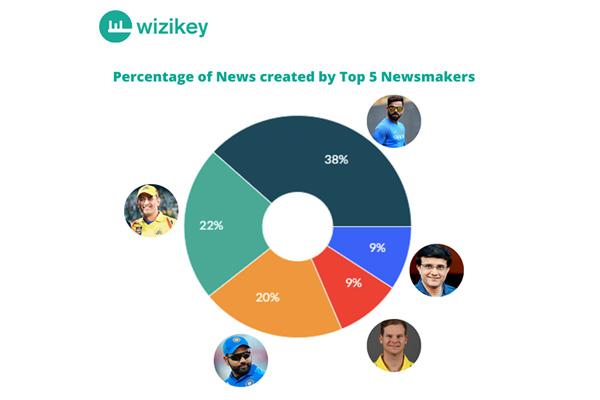 7th January 2020: Cricket is considered as a religion in India and the Indian Cricket Team also lived up to that expectation with the dominance in World Cricket. Wizikey, Asia’s first PR and communication platform has collated interesting trends across industries using its AI and ML-based Technology and created a report on the top newsmakers of 2019 in the Cricket world. The report has been created after a thorough study of all the news published in the sector from the 1st of January to date.

Highlights of the report:

The top newsmakers in the Cricket category for the year 2019 were:

Anshul Sushil, Co-Founder and CEO of Wizikey said, “We always enjoy our favorite players performing good on the ground but it is interesting to see how personalities perform in media and how much attention they have got. ”

Virat Kohli had a great 2019, from India reaching the semi-final of the World Cup to the first Day-Night test match. World Cup 2019 was the biggest newsmaking event in terms of cricket and India’s exit in the semi-final stage was not well received by the fans. The Indian cricket team was also surrounded by some controversies like the Army Camouflage caps incident. All the news on the Indian Cricket Team had a mention about Virat Kohli as he is the captain of the Indian Cricket Team. Virat Kohli also entered the 11th year of his career in 2019 which created an exceptional amount of news.

MS Dhoni made his mark yet again in the Indian Cricket landscape with his remarkable performance in the 2019 World Cup. He also led CSK to the IPL Finals but eventually lost to MI. 2019 was a bit of a relaxing year for MSD as he was spotted playing billiards and enjoying in his hometown.

Rohit Sharma had a marvelous 2019 with the highest number of runs for India in the World Cup with back to back hundreds. He also led the Indian side against Bangladesh. He emerged as the new sixer-king for the Indian side with a record number of sixes in a single test. Rohit performed remarkably well against the West Indies. He also led the Mumbai Indians side to the IPL title.

2019 was one of the most successful years for Steve Smith in terms of performance and in terms of news as well. He made a solid comeback with IPL after the ban and also scored a lot of runs in the World Cup and Ashes. He played remarkably well against Pakistan and all of this helped create an outstanding amount of news for the Australian.

2019 was the most buzzworthy year in the recent past for Sourav Ganguly as he was made the president of BCCI. His remarkable contribution in India playing its first Day-Night Test also added to his visibility. However, there were some controversies about Sourav’s comment on the removal of portraits of Pakistani Cricketers from Eden Gardens.

Wizikey is a PR Software-as-a-Service that uses data and AI to simplify PR, making it transparent and measurable for Fortune 500 companies and startups alike. It enables users with features like realtime media intelligence, helping to deliver stories to the right journalist while saving spam, hours of scrutiny and giving brands the voice they need.

Wizikey’s co-founders Anshul and Aakriti have spent over a decade in the communications industry, identifying key problems as they served 300+ businesses. These first principles form the foundation of Wizikey – to make the communications industry efficient, transparent and measurable through the power of data and AI tech. With investors like Ajai Chowdhry (Co-founder, HCL), Alok Mittal (Co-founder and CEO, Indifi), Ambarish Raghuvanshi (ex-CFO, Info Edge), Keshav R Murugesh (CEO, WNS), Raman Roy (Chairman, NASSCOM and Chairman, Quattro), Sanjiv Bajaj (CEO, Bajaj Finserv) and the Indian Angel Fund among others, we strive each day to make PR accessible and simple – for everyone.

Antonia Rudiger’s racism investigation closed due to lack of evidence

Couldn’t be more proud of these guys: Warner on impressive Australian summer