The 24 year old wrestler from Haryana has defeated local grappler Roksana in the final of the competition.

Vinesh Phogat has earlier beaten Sofia Mattson of Sweden, the Rio Olympics bronze medalist, in the quarterfinals of this tournament.

After her triumph at the tournament, she tweeted, “the biggest positives from wrestling against strong opponents are it forces me out of comfort zone, makes me push my limits, and teaches important lessons! Happy with my performance at the #PolandOpen excited by this start as 53 kg wrestler, now onwards and upwards.”

She also added, “As always, thank you to everyone out there for the constant stream of good wishes, love and support A big thank you to my coach Woller Akos, physio Rucha, @Indiasports @FederationWrest and @OGQ India.”

Former national hockey captain Viren Rasquinha, who is also involved with Olympic Gold Quest, congratulated Vinesh on her success. She tweeted, “Congrats @Phogat_Vinesh as she wins the gold medal beating the local girl 3-2 in the final of the Poland Open. This is Vinesh’s third gold in 53 kgs after Spain and Turkey. Well done, @Media_SAI, #TOPS and #WFI. We are proud to support this champion Vinesh@OGQ_India.”

The Seeker: How Tech is Revolutionizing Football Practice 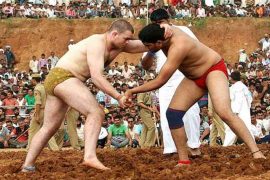 Keeping the spirit of dangal alive in the akhadas of Haryana