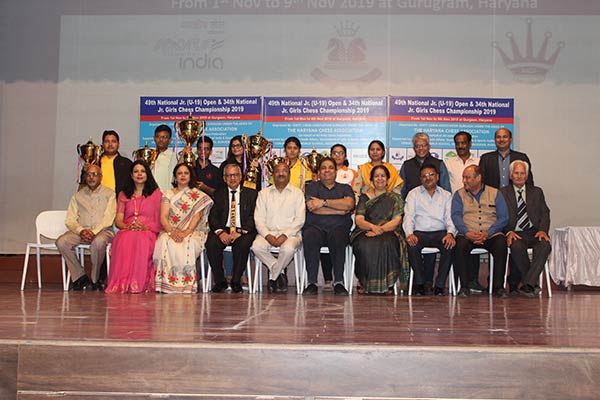 At this year’s National Junior Chess tournament, out of 300 talented chess players, Srishti Pandey of Maharashtra and Aradhya Garg of Delhi won to represent India in the World Junior Chess Championship 2020 to be held in India.

The 9-day National Junior Chess Championship 2019 at Suncity School Gurugram, organised by District Chess Association under the aegis of The Haryana Chess Association and All India Chess Federation concluded today.

Mrs. Rupa Chakravarty, Director, Suncity School congratulated the players for their brilliant performance, she said, “This was a great platform for players from across the country to showcase their talents. These kinds of tournaments provide them with an opportunity to take their game to another level.”

The 49th Junior (U-19) Open & 34th Junior (U-19) Girls Chess Championship witnessed a tough competition and all the players put up an excellent competition. Shri Sudhir Singla felicitated the winners and congratulated them on their achievement.

An elated Srishti Pandey, shared her experience and said, “This has been one of the best tournaments for me and was a great learning experience. I have a long way to go and I hope to continue this performance. I would like to suggest other players to stay focus and not to lose interest in chess.”

After the National Junior Chess Tournament, the ranking status of the Top 10 (U-19) players is as follows:

Only challenge is to keep up with standards set by team: Kohli ahead of 1st Test against Bangladesh