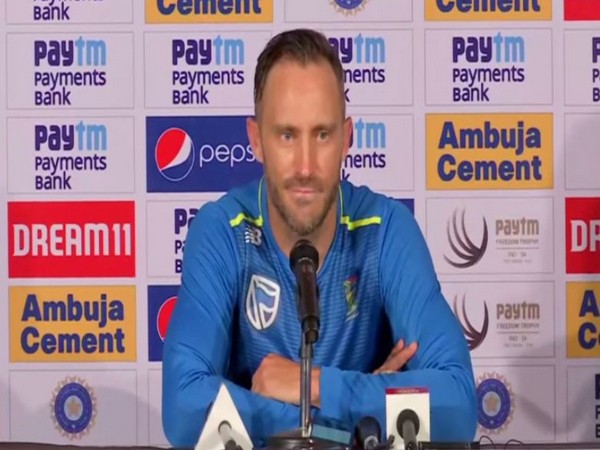 Centurion [South Africa], Dec 30 : South Africa skipper Faf du Plessis said that ‘it is a start of a new chapter’ after the 107-run win against England on Sunday.

“We needed that. It’s the start of a new chapter. We want to make sure we are improving as a Test team again. We want to go up to better things again and this is just the start,” International Cricket Council (ICC) quoted Plessis as saying.

With the win, the hosts have opened their account in the World Test Championships standings. South Africa has also gained their first 30 points in four Tests.

South Africa now lead the four-match series 1-0. It was the first Test win for Proteas after five successive defeats and sixth consecutive win at Centurion. This is the first time that South Africa have defeated England in a Boxing Day Test.

Quinton de Kock was named player of the match for smashing 129 runs and taking eight catches behind the stumps.

Hailing the teammates for their individual efforts skipper said Proteas ‘are a team of fighters’.

“As a team, we don’t have a lot of superstars. You can say guys like KG [Rabada] and Vern Philander are superstars in their own right. But as a team, we take a lot more from victories where everybody contributes in their own way. Small things like Nortje getting 40 with the bat are even more pleasing … Our bowling unit was exceptional. All of them put their hands up,” Plessis said.

“It’s a South African thing. We are a team of fighters. We love something to spark a little something like that. Our feeling was that when he comes in, we will do exactly the same thing to him,” he added.

Both the teams will now face off each other in the second Test at Cape Town commencing on January 3.