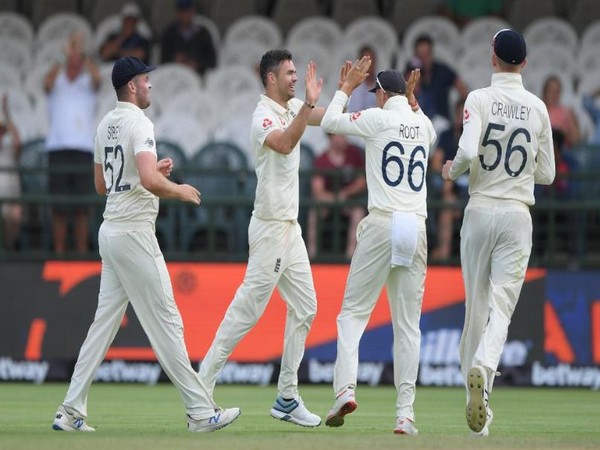 Cape Town [South Africa], Jan 6 : England continued to dominate South Africa on day four of the second Test here on Monday as the host need 312 runs on the final day to win the match.

Resuming the second innings from 218/4, England got off to a great start with Dom Sibley and Ben Stokes on the field.

Sibley and Stokes completed century and half-century respectively, which helped putting England on a commanding position.

Stokes played a fast-paced innings and scored 72 runs off 47 balls before Keshav Maharaj got hold of him. Ollie Pope then came out to bat but failed as he was bowled by Kagiso Rabada after scoring three runs.

England could not form a decent partnership and declared their innings at 391/8d with Sibley (133) and Stuart Broad (8) on the field.

South Africa had a good start to their second innings as they were chasing a target of 438 runs. The openers Dean Elgar and Pieter Malan formed a 71-run partnership before the former was caught behind off Joe Denly’s delivery. Elgar played a knock of 34 runs.

Zubayr Hamza then took the charge and joined Malan on the other end. Malan completed his half-century but soon after that his partnership was broken by James Anderson, who dismissed Hamza (18).

Keshav Maharaj was the next South African batsman. Malan and Maharaj are playing at 63 and two respectively and will resume host’s second innings from 126/2.

Designed for the New Decade, the All-New Amazfit HomeStudio Brings the Future of Immersive Fitness Training to Your Home