India China Diplomatic relations has taken a hell road amid new updates coming from the Winter Olympics 2022 happening this year in beijing. Chinese sports Authority has made a soldier of People’s liberation army who was involved in the Galwan Incident on Line of Actual Control happened in 2020.

The soldier identified as Qi Fabao, is reportedly a regimental commander of the People’s Liberation Army (PLA) and was grievously wounded during the 2020 border skirmish with Indian troops in the Galwan Valley. 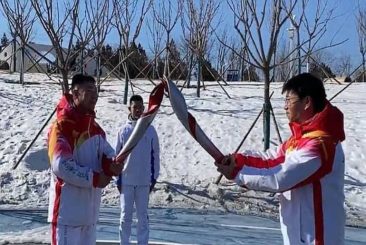 The skirmish on LAC was a dreaded and bloody one in which Colonel Santosh Babu of Bihar regiment and many soldiers fought valiantly to shred down around 40+ PLA soldiers with their non-arms resistance, for which Chinese authority hasn’t yet released number of soldiers from their side who lost their lives.

Colonel Santosh Babu and some of the soldiers from our side sacrificed their lives for motherland at the altar of duty.

The torch of Winter Olympics 2022 will be carried through the three Olympics zones, starting with downtown Beijing before heading to Yanqing district and finally Zhangjiakou in neighboring Hebei Province.

The scaled-down torch relay is a far cry from 2008, when Beijing sent the Olympic flame on a global journey ahead of hosting that year’s Summer Games. The relay drew protesters against China’s human rights violations and policies in Tibet, Xinjiang and elsewhere, leading to violent confrontations and the cancellation of some overseas stages.

The Winter Games have also been marred by political controversies, alongside medical considerations.

Six weeks ago, the United States, Britain and several allies said they would not send dignitaries to attend the Beijing Games as a protest against human rights abuses by the Communist Party regime.

In Winter Olympics 2022 , Athletes have been threatened by the organizing committee with “certain punishments” for saying or doing anything that would offend their Chinese hosts, while several delegations urged anyone headed to Beijing to take “burner” phones instead of their personal devices because of concerns their personal information could be compromised.