It seems with the upcoming launch of Nike $350 Adapt BB in this month, ‘self- lacing shoes’ are coming in vogue and amid this trend German sportswear major Puma does not want its rival (Nike) to take all the credits. 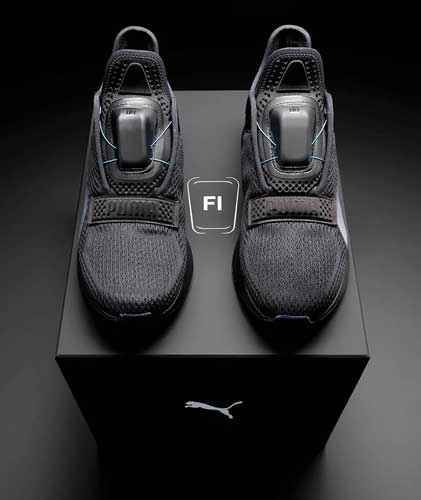 After a series of researches and developments for three years over the new pair of self-lacing shoes, Puma has come up with Fi sneaker which is going to launch in the spring of 2020 at just $330. So all fitness enthusiasts as well as gym goers out there, it’s time to gear up as Puma is here with its latest product in its fitness intelligence footwear Fi Sneakers.

Puma Fi sneaker does not tighten up like Adapt BB. Instead it has a swipe-activated motor fitted on the top of shoe’s tongue that tightens the shoe laces. It should be noted, German brand has already introduced self-lacing sneaker, the Autodisk, back in 2015. However, due to its less practical design, high price and weight, the shoe could not hit the retail store.  “We have created a product that speaks to the future of sport which is life in motion. It’s fast and changing all the time” said Charles Johnson, Puma’s Global Director of Innovation. The company tries to put much more attributes in to the sneaker than just self-lacing technology.

Introducing a “performance fit” technology, Fi sneaker is coming with a micro-motor that powers a “uniquely configured cable system” to lace up the shoes. The sneaker also comes with smart sensing capability which allows it to shape up itself according to a user’s fit.  Besides, one can also made some fitting adjustments while on the run by connecting it to an Apple watch. All new Black Fi sneaker has been designed with an added breathable upper section and an “Industrial Grade” fiber support system.

Puma Fi being the very first sneaker is going to be introduced under Puma’s Fi technology and will be available in the market in 2020 for $330 which is $20 cheaper than its competing product Nike’s newly launched Adapt BB Basketball Sneakers.