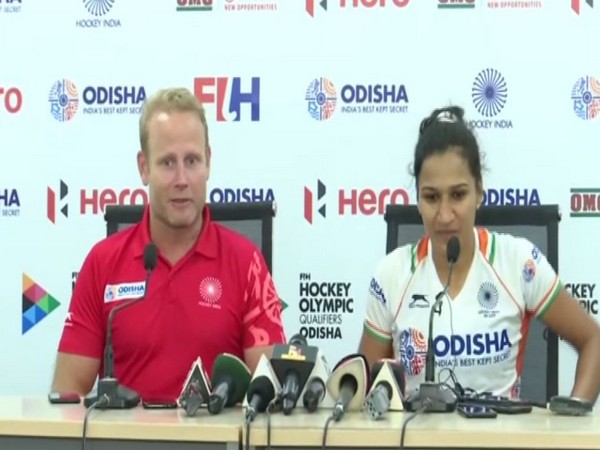 Bhubaneswar (Odisha) [India], Nov 3 : After qualifying for the Tokyo 2020 Olympics, India women’s hockey coach Sjoerd Marijne said that the real preparation will start now and the entire side is focused on winning a gold medal for the country.

“I have already said it to the girls that we have a dream, and it is to win the medal at the Olympics. The most beautiful colour in the Olympics is gold. Our real preparation starts after this, there are just ten months left for the Olympics,” Marijne told reporters after the win.

The Indian team which defeated the USA 5-1 in the first leg, lost the second leg 4-1 against the same opponent, but the side did enough to qualify for the Olympic as they defeated USA 6-5 on aggregate.

Coach Marijne said that he was disappointed with the performance shown by the side in the first half and he did not know how to comprehend such performance.

“The first half, I was like what is happening here, what is going on? I did not where to start in the match, there were many things that went wrong in the match. At half time, I told the girls, it is 0-0, you start fresh, we cannot change what happened in the first half, but we can change what will happen in the second half. I told you the girls you cannot play with your head down,” Marijne said.

Skipper Rani Rampal said that the youngsters in the team showed great composure in the game and added that if the side had lost the match, it would not have ended their career.

“It was the first opportunity for youngsters. I never thought this match would end our career as we have worked very hard to prepare for such games. The USA converted their chances, we were trailing 0-4 but the girls showed a lot of energy till the very last moment of the match,” Rani told reporters.

In the second leg of the Olympic qualifiers at the Kalinga Stadium, the USA had the first sight of goal in the fifth minute of the match. Kathleen Sharkey then added another goal in the 14th minute, giving the US a 2-0 lead.

The USA continued its aggressive form in the game and just after six minutes, the team took their lead to three goals with the help of Alyssa Parker’s strike.

Consolidating the USA’s position further in the match, Amanda Magadan netted another goal, taking the scoreline to 0-4.

India scored a goal in the 49th minute, taking the scoreline to 1-4. The team then played cautiously and restricted the USA from scoring more goals.

Hence the game concluded with an aggregate score of 6-5 which enabled India to qualify for the Tokyo Olympics.