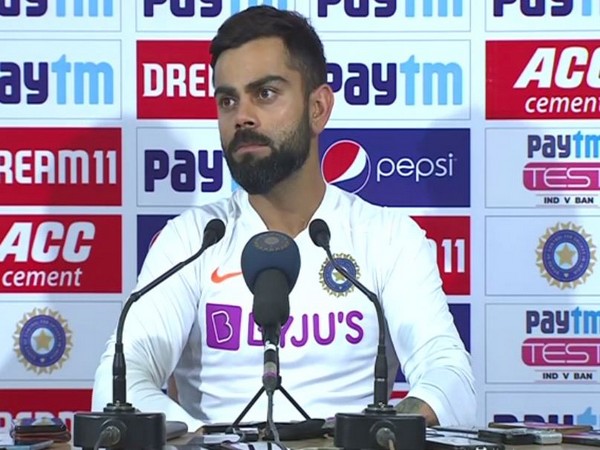 Kolkata (West Bengal) [India], Nov 24 : India skipper Virat Kohli said he is open to play day-night Test away from home if given enough time to prepare.

“There has to be planning for a pink ball game. We are playing on home conditions but if you ask Bangladesh they would have also liked a practice game before this game. Just because we know our conditions and our bowlers are bowling so well, you do not really feel that challenge. Maybe when we play away from home, we will figure out what could be even more difficult playing with the pink ball,” Kohli said in the post-match press conference here on Sunday.

India thrashed Bangladesh in their first-ever day-night Test match by an innings and 46 runs. Kohli smashed his 27th Test century in the match, scoring 136 runs to help India put up a total of 347 in the first innings.

Bangladesh scored 106 in their first innings after opting to bat first while they were bundled out on 195 runs in their second innings. During the second innings, Mahmudullah was retired hurt did not come to bat on day three.

The hosts also won the two-match Test series 2-0 against Bangladesh.

However, the skipper said a person cannot judge a team’s dominance in just seven games.

“I can only say we are at the top of our game. You cannot judge a team’s dominance with seven games. West Indies side did it for 15 years. When we are all close to retiring, then you ask me this question that how the decade has gone of playing together. If it was seven years then yes but not seven games,” he said.

“I think there is still a bit of time to go for that but we are excited about how we are playing and now the frame of mind is to get to the next series in Test cricket,” Kohli added.

Terrific display by the lads: Kohli praises team after win over Bangladesh

Punjab: All arrangements for International Kabaddi Tournament will be completed well in advance, says Sports Director