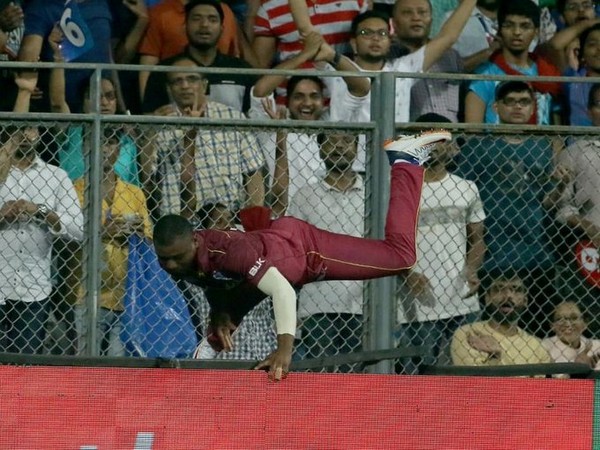 Mumbai (Maharashtra) [India], Dec 11 : West Indies opener Evin Lewis has injured his right knee while fielding in the ongoing third T20I against India and was taken to hospital for a scan on Wednesday.

He will unlikely to bat and has damaged soft tissue to the right knee which will significantly restrict his ability to run between the wickets.

“INJURY UPDATE: Evin Lewis was taken to the hospital for scans on the right knee. A later update will be available on the prognosis. He will not open the batting & Brandon King will open with Lendl Simmons. #INDvWI #MenInMaroon,” WI tweeted.

Chasing 241, Lendl Simmons and Brandon King opened innings for Windies. Earlier, KL Rahul and Rohit Sharma’s knocks of 91 and 71 respectively enabled India to post a score of 240/3 in the allotted twenty overs.

Openers Rohit and Rahul provided a quickfire start to India as they put on 72 runs in the opening six overs. Rohit also went on to register his 400th international six in the match.

Sharma continued to wreak havoc on Windies’ bowlers and as a result of his efforts, India brought up a score of 100 in just eight overs. The right-handed Sharma also went past the 50-run mark in just 22 balls.

In the 10th over, Rahul brought up his consecutive fourth half-century in the shortest format of the game. West Indies finally got the breakthrough in the 12th over as Kesrick Williams dismissed Rohit (71).

Rishabh Pant (0) once again failed to leave a mark as he was sent back to the pavilion by Windies skipper Kieron Pollard, reducing India to 138/2.

Skipper Virat Kohli next came out to bat and he along with Rahul ensured that the side keeps on scoring runs at a steady pace.

Kohli batted in an aggressive manner throughout and as a result, he brought up his half-century of just 21 balls.

Sheldon Cottrell dismissed Rahul (91) in the final over innings, but India managed to go past the 240-run mark in the allotted twenty overs. Kohli remained unbeaten on 70 runs off just 29 balls.

Earlier during the match, the board gave an update on Lewis’s injury: “INJURY UPDATE Evin Lewis is receiving treatment by WI Medical Staff on his right knee. He will not return to the field during India’s batting innings. Another update will come at half time break. #INDvWI.”