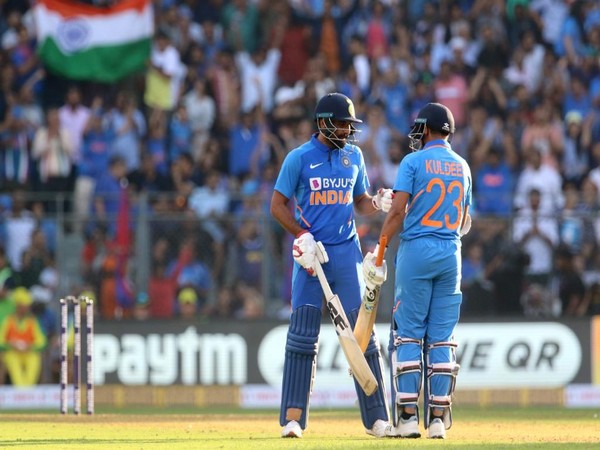 Mumbai (Maharashtra) [India], Jan 14 : Despite losing a key wicket in the initial overs and facing the tough bowling challenge by the Australian pacers, India managed to score a decent target of 255 runs in the ongoing first ODI here at the Wankhede Stadium on Tuesday.

After being put in to bat first, India got off to bad start as Rohit Sharma got out in the fifth over.

KL Rahul and Shikhar Dhawan stitched a 121 run stand to revive India’s hopes in the match. Ashton Agar dismissed Rahul (47) in the 28th over which provoked a middle-order collapse.

Dhawan’s wicket in the next over added insult to the injury. The hosts then struggled to stitch any strong partnership as skipper Virat Kohli (16) and Shreyas Iyer (4) both went cheaply.

Rishabh Pant and Ravindra Jadeja’s 49 run stand gave some hopes but a flurry of wickets in the death overs saw India getting all out at the score of 255.