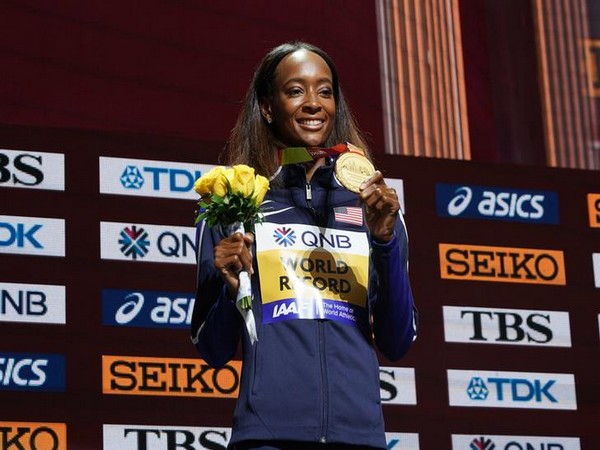 Muhammad, the Olympic champion, broke the 400m hurdles world record twice in 2019, but it was her second, on October 4 which propelled her to her first world title.

In one of the most eagerly anticipated match-ups of the 2019 World Championships, Muhammad faced Diamond League champion Sydney McLaughlin in a race that didn’t disappoint. Both went out hard, running virtually even after the first 200 metres. Muhammad built a narrow lead midway through the final bend to enter the final straight with a two-metre lead.

McLaughlin fought back but Muhammad held her off in the waning stages to shave a further 0.04 seconds from the mark she set at the US Championships on July 28. Muhammad’s performance earned her a USD 1,00,000 bonus as part of the world record program supported by QNB. She was later named World Athlete of the Year.

The women’s high jump in Doha was nearly as dramatic as Mahuchikh twice broke the world U20 record with leaps of 2.02m and 2.04m on September 30 to take surprise silver behind defending champion Mariya Lasitskene. With her stellar performance, Mahuchikh bettered the previous world U20 mark of 2.01m held by USSR’s Olga Turchak and Germany’s Heike Balck from 1986 and 1989 respectively. The rising Ukrainian star also became the youngest ever World Athletics Championships field event medallist.

Cheptegei capped one of the most sensational all-around distance running seasons in recent years with his commanding run at the 10K Valencia Trinidad Alfonso on December 1 where he clipped six seconds from the previous record of 26:44 set by Leonard Patrick Komon in 2010.

The 23-year-old Ugandan’s performance came less than two months after he cruised to the world 10,000m title in Doha where he clocked 26:48.36, the fastest time in the world in 2019, and eight months after he led a Ugandan 1-2 finish at the World Cross Country Championships in Aarhus, clocking 31:40 over the notoriously difficult 10.24km course.

It was a largely solo effort for Cheptegei, who overtook the pacesetters before the halfway point, reaching 5k in 13:23, one second shy of the world record for that distance.

Kenya’s Cheserek, who won a staggering 17 NCAA titles while a student at the University of Oregon, clocked 13:29 at the Carlsbad 5000 in Carlsbad, California USA on April 7, 2019, to equal the record set by Julien Wanders on February 17, 2019, in Monaco.

Robert Keter broke the world 5km record with a 13:22 performance on November 9, 2019, in Lille, France, a record which has since been ratified.

The 5km road distance was introduced as an official world record event in November 2017, with the inaugural record to be recognised after January 1, 2018, if the performances were equal to or better than 13:10 for men and 14:45 for women.

Several athletes, however, have gone quicker than Keter’s 13:22 before the 5km became an official world record event. The fastest time ever recorded for the distance remains Sammy Kipketer’s 13:00 clocking in Carlsbad in 2000.