Needing only 34 minutes to make her case, the Nagpur player matched Saina shot for shot and played strategically to defeat the 2-time India Open champion, 21-17, 21-9.

In doing this, Malvika Bansod became the second Indian badminton player after PV Sindhu, who has managed to defeat Saina Nehwal on the court since 2007 in the domestic and international badminton circuit. This was Bansod’s first meeting against her ‘idol’ and playing against Nehwal is a ‘dream come true’ for the youngster.

However, Nehwal, after her first-round match against Czech Republic’s Tereza Svabikova where she had a retirement victory, told in the Mixed Zone interaction that she is only ’60-70% fit’ at this stage and she is yet to reach her fitness potential. 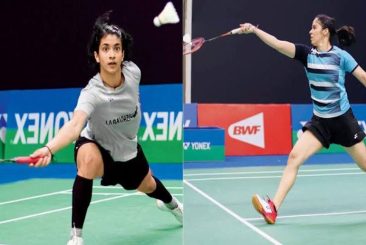 Against Malvika Bansod, Nehwal showed that she is far from her usual best as she committed a lot of unforced errors, especially at the net – and it was rather uncomfortable to see Saina struggling that way. Bansod, simply capitalized on such moments and pushed Nehwal into a lot of rallies and dragged her into net shots repeatedly – that saw the match swinging in her way.

“It has not sunk in yet,” said Bansod, sounding ecstatic. “It was a dream come true to play against her in such a big event. Saina has been my idol because she has been the flag-bearer of women’s badminton in India for more than a decade. That’s the reason why I took up badminton. When I started out, I used to get overawed by her game, style of play and power.”

Thirty four minutes was all it took for the Nagpur-born to beat Nehwal, the 2012 Olympic bronze medallist, 21-17, 21-9 and notch up the biggest win of her fledgling career and make the quarter-finals of the $400,000 India Open at the Indira Gandhi Sports Complex in New Delhi.

Rishabh Pant hits a ton, shocks the critics with gameplay